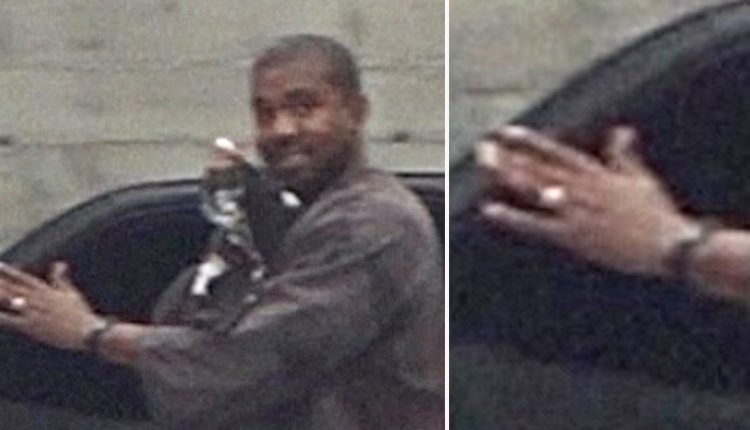 Kanye West appeared to be in good spirits as he was pictured still wearing his wedding ring just days after it was revealed that his estranged wife Kim Kardashian had filed for divorce.

The Flashing Lights rapper was spotted climbing out of his car outside his office in Calabasas, California on Wednesday morning, dressed casually in a grey jumper and blue trousers.

Despite the turmoil in his personal life, Kanye, 43, looked cheerful enough and smiled as he exited the vehicle before taking a phone call.

It appears the musician is yet to remove his wedding band as it was still visible on his ring finger.

Kim, 40, is reported to have filed divorce papers in February after six years of marriage, citing irreconcilable differences.

The couple tied the knot with a lavish Italian wedding in 2014 and went on to have four children together; North, seven, Saint, five, Chicago, three, and Psalm, one.

However, the past year has put immense strain on their marriage, with events including Kanye running for US president and making a string of shocking claims at his campaign rally, such as that he and Kim considered aborting their first child.

He then embarked on various Twitter rants which included calling out Kim’s mother Kris Jenner, but the reality star later released a statement explaining that she was supporting the rapper amid his mental health battle.

Divoce proceedings are reportedly ‘amicable’ between the pair. According to TMZ, Kim is asking for joint legal and physical custody of their brood which Kanye is reportedly ‘fine’ with. They are also said to be ‘committed’ to co-parenting their little ones together.

As part of their divorce settlement, Kim is expected to keep their $60 million (£43 million) family home in Hidden Hills to ensure there is minimal disruption to their children’s lives.

Kim was keen to remain in the home because she ‘really likes the house’ and the fact most of her family live ‘within a block of her in the same community’.

Kim and Kanye bought their home in Calabasas, California, in 2014 for $20 million (£14.7 million). The pair are thought to have spent another $20 million renovating.