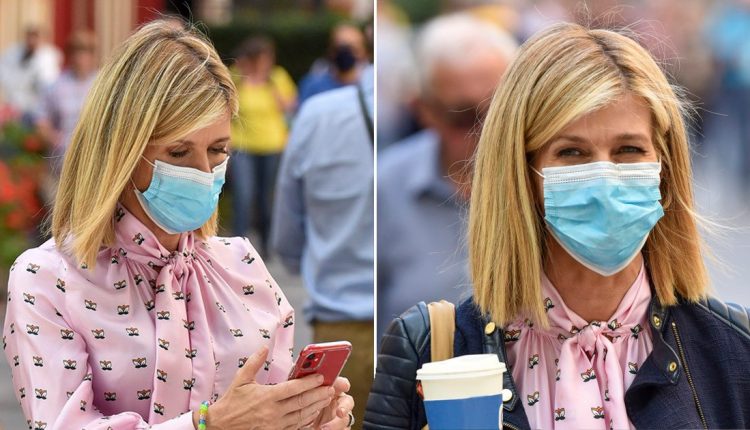 Kate Garraway was spotted leaving work following her appearance on Good Morning Britain where she had to explain a debate about dad-bods to Wayne Lineker.

The presenter, 53, was spotted wearing the pink dress she had had on for the show as she carried a coffee through London’s Leicester Square.

Kate paired her pink dress with a black jacket and a blue surgical mask to protect her amid the ongoing coronavirus pandemic.

She had earlier spoken to Wayne on GMB during a debate about whether women prefer dad-bods to men that have shredded physiques.

However, Kate had to explain what the debate was about to Wayne, saying: ‘Yep, we’re talking about a survey that says women actually don’t look for toned people.

‘I’m slightly worried that you don’t know what we’re talking about. It’s making me a little bit nervous.’

Kate then admitted even she had lost the thread of the chat, leading viewers to dub it ‘car crash TV’ after it went awry.

The presenter has also recently returned to present her Smooth radio show after taking time off while her husband Derek Draper battles coronavirus.

She was encouraged to go back to work by the doctors, as well as so that Derek is able to ‘hear my voice as well as many of the songs we both love’.

Derek has been in hospital since the end of March and still remains in a minimally conscious state after being brought out of an induced coma.

Doctors had put him into the coma to allow his body to recover from the effects of coronavirus, though they warned Kate that there is a chance he may never come round properly.

He was left with several other issues after the virus, including holes in his heart and diabetes, as well as issues with his kidneys and lungs, and Kate was told he was one of ‘around five people in the world’ to have been so badly affected by Covid-19.

The pair were due to celebrate their 15th wedding anniversary last Thursday, and Kate revealed on Good Morning Britain: ‘We did our best to make it special.

‘We had him on FaceTime. We raised a glass to say happy anniversary. I have a card to take to read to him.

‘He was a prolific card writer for birthdays. He’d always remember. And hopefully he’ll do it again. It will be strange reading to him, but this time I have made a bit more of an effort.’