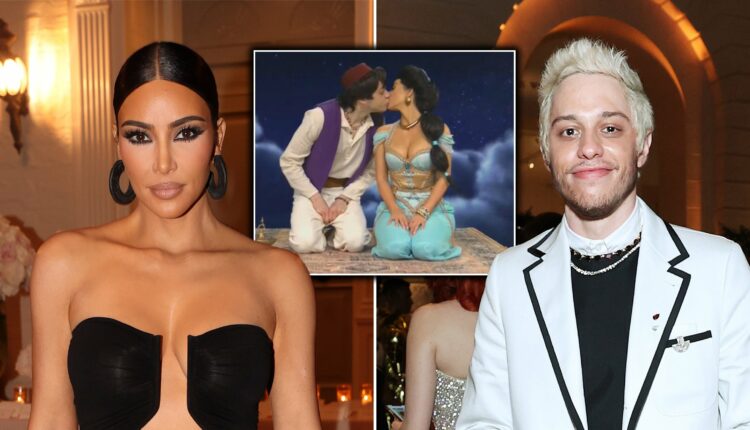 Kim Kardashian and Pete Davidson were caught having a hotel rendezvous this weekend and weren’t trying to hide it.

The rumoured couple were spotted by a fan and his mother at the Beverly Hills Hotel in Los Angeles on Saturday.

Tourist and Dutch music journalist, Paul Barewijk, was the eagle-eyed fan who spotted the pair enjoying a low-key breakfast.

In the photos shared to his Instagram, Kim is seen flashing the peace sign while Pete did the same.

Recalling their chance encounter, Paul told People: ‘All of the sudden I looked to my right and saw Pete Davidson. I talked further with my mom and then I thought, “Who is he talking with?” Because I know the latest dating rumours. And so, it was Kim Kardashian!

‘I asked her for a photo. She said, “Okay, sure”, and I asked Pete to take the photo. So he did. We took two photos. I told him that people in The Netherlands like him because of SNL, so.. selfie? He took it!’

Paul said the couple ‘looked happy’ and sat close to each other before walking away together.

‘It looked like a date to me,’ he stated.

The fan shared the two photos to his Instagram on Saturday and wrote in Dutch: ‘Omg make me crazy! Sitting right next to Kim Kardashian and Pete Davidson for breakfast!’

Rumours about the two swirled for weeks before they were seen holding hands and heading out for dinner together after kissing during a sketch on Saturday Night Live for an episode Kim was hosting.

Neither have officially commented on the rumours but the pair were seen last week holding hands and giggling together in a car – and if that’s not enough to sent the rumour mill into overdrive, Pete was sporting what looked to be a fairly considerable love bite.

There could be a spanner in the works of their romance as Kim’s estranged husband Kanye West has made several public declarations that he wants her back, despite the mother of his four children filing for divorce in February.


MORE : Kanye West shares throwback picture of him kissing Kim Kardashian after saying God will bring them back together