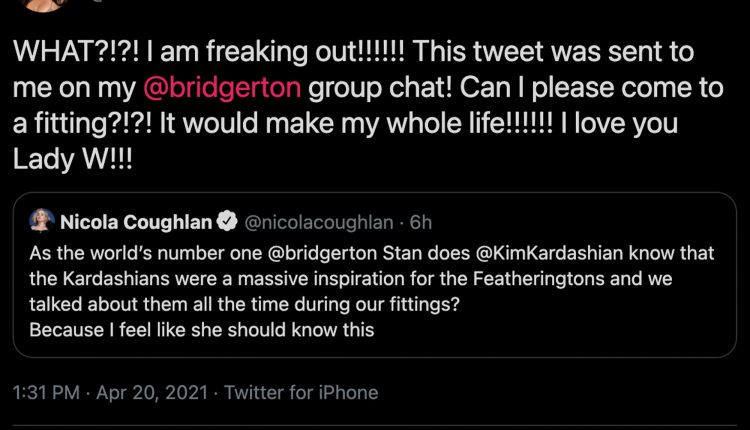 Kim Kardashian Is ‘Freaking Out’ After ‘Bridgerton’ Connection Is Revealed

Kim Kardashian got the tea straight from Lady Whistledown herself. Nicola Coughlan, star of Netflix’s Bridgerton told Kardashian, 40, about all the ways the historical series is connected to the reality star.

“As the world’s number one @bridgerton Stan does @KimKardashian know that the Kardashians were a massive inspiration for the Featheringtons and we talked about them all the time during our fittings?” Coughlan, 34, tweeted Tuesday, April 20. “Because I feel like she should know this.”

An hour later, the KKW Beauty founder made it clear that she had been unaware but was delighted to learn the fun fact. “WHAT?!?! I am freaking out!!!!!! This tweet was sent to me on my @bridgerton group chat! Can I please come to a fitting?!?! It would make my whole life!!!!!! I love you Lady W!!!” the entrepreneur wrote.

The mother of four has made her obsession with the Netflix series very clear, and the affection goes both ways. Coughlan, who plays Penelope Featherington (AKA Lady Whistledown), said she’d love to have the reality star on set before revealing that their corsets were made by the same designer.

“Omg yesss of course we would love to have you!” the Derry Girls star replied. “Also did you know that Mr Pearl made your corset for the Met Gala and the very next one he made was mine for Bridgerton? You’ve been part of the Bridgerton world for longer than you know!”

The businesswoman then went full fangirl. “OMG I’m gonna faint!!!!!! Does this make me an honorary Duchess in Bridgerton ?!?!?!? I am the corset Queen!!!” she wrote with a winking emoji.

The Irish actress even told fans that she and her onscreen sisters spent time comparing their characters to the Selfish author and her sisters Khloé Kardashian and Kourtney Kardashian. Coughlan remains convinced that her onscreen counterpart has plenty in common with the SKIMS founder.

“The three of us genuinely debate this all the time, I think Prudence and Phillipa are very Kourtney and Khloe cos they’re besties, and Pen is a very successful business woman,” Coughlan wrote to a fan. “Also I remember Kim being like a very good detective too so there’s that…”

Much like Kim, the Harlots alum couldn’t contain her excitement about the exchange. “You know I’ve loved Kim for like over a decade, I can’t even deal,” she tweeted later in the afternoon.

As Kim wraps up her 20-season run on Keeping Up With the Kardashians, Coughlan is heading into production on season 2 of Bridgerton. Netflix has already renewed the regency romance for a third and fourth season.

Scott Rudin Steps Back From Films