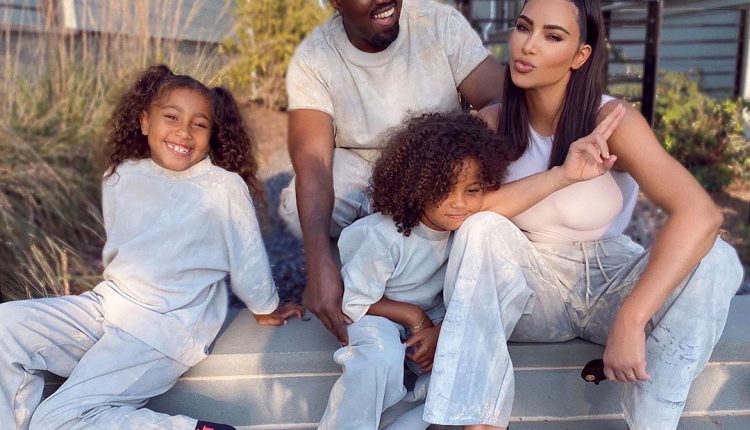 Feeling the love! Kim Kardashian shared a sweet family photo with Kanye West and their children North and Saint amid her husband’s mental health struggles.

The Keeping Up With the Kardashians star, 39, shared the snapshot via Instagram on Saturday, October 3. In the picture, the foursome wore matching gray pajama bottoms while they posed outside on a step.

West, 43, smiled as he looked at Kardashian, who threw up a peace sign while puckering her lips. North, 7, also flashed a smile while Saint, 4, looked tired as he rested his head on his mom’s knee. Kardashian simply captioned the post with a kissy-face emoji.

The couple — who also share daughter Chicago, 2, and son Psalm, 16 months — have weathered many ups and downs in recent months. Back in July, the “Lift Yourself” rapper opened up during his first presidential rally about the couple almost aborting their eldest child. Days later, he tweeted that he’d been wanting to divorce Kardashian, whom he claimed was trying to “lock him up.” The Grammy winner later apologized for his tweets.

“Those that understand mental illness or even compulsive behavior know that the family is powerless unless the member is a minor,” she wrote via Instagram at the time. “People who are unaware or far removed from this experience can be judgmental and not understand that the individual themselves have to engage in the process of getting help no matter how hard family and friends try.”

A source told Us Weekly in August that Kardashian is “focused on healing her relationship with Kanye and has been busy taking care of their kids and him.”

West went on another Twitter rant in September when he claimed he would not release new music until his contracts are done with his current publisher and record label. The “Wash Us in the Blood” rapper reiterated his point when he shared a video of himself peeing on one of his 21 Grammy awards. West also vowed to help Taylor Swift — whom he has feuded with for years — get her music rights back.

Later that month, a source told Us that Kardashian is “deeply disappointed and sad because Kanye is struggling.”

The insider explained that the Skims founder “doesn’t care about the tweets, that is Kanye being Kanye,” but noted she was having trouble with “the mood swings and the manic episodes [that] are extremely difficult for Kim to help Kanye cope with.”

However, a second source told Us that Kardashian is still “committed to holding it together for their kids.”

Leeds did not deserve to win ‘beautiful game’ – Bielsa

‘Mean Girls’ Cast: Where Are They Now?