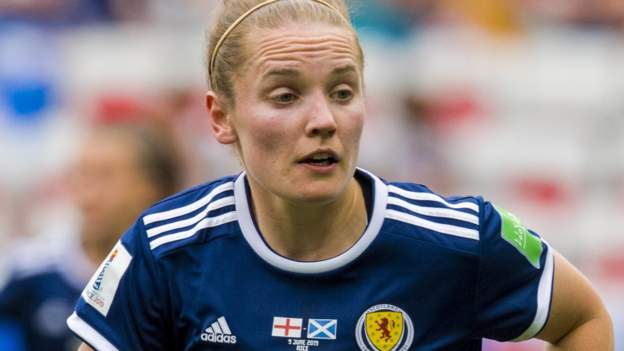 Midfielder Kim Little has been hailed as one of Scotland’s best-ever players after announcing her retirement from international football.

The Arsenal captain played in all three of Scotland’s group games in the 2019 Women’s World Cup and scored the opener against Argentina in a 3-3 draw.

Little says she has been considering international retirement “for a while”.

She steps away before Scotland begin their 2023 World Cup qualification campaign this month under new head coach Pedro Martinez Losa.

“I feel now is the right time to make that change,” said Little.

“I am proud of the 15 years I have spent representing the national team. I have developed and grown as a person through my experiences representing my country and know they will help me in countless ways in the future.

“Thank you to my team-mates for being incredibly empowering and inspiring women. My most vivid and fondest memories are from being by your side on and off the pitch through good times and some challenging times, pushing for progress for the women’s game.

“I now look forward to supporting you all from afar and can’t wait to watch you perform and continue to improve the women’s game in Scotland, paving the way for more young girls to have a career as a footballer.”

Little started her senior career at Hibernian and is in her second spell with Arsenal after playing for Seattle Reign and Melbourne City.

She helped Scotland to qualify for Euro 2017 – the women’s national team’s first major finals – but missed the tournament through injury.

Little was the BBC women’s footballer of the year in 2016, and her goal in a home win against Switzerland two years later was pivotal in sending Scotland to their first World Cup in 2019.

Scotland head coach Martinez Losa paid tribute to Little, with the Spaniard saying: “Kim has contributed hugely to the women’s game in Scotland and will go down in history as one of the best players to pull on the national team jersey.

“While it is obviously disappointing that Kim will no longer be available for international selection, I understand and respect her decision.

“It is now time for the next generation of players to follow in Kim’s footsteps and make their own mark with the national team.”

How Freelance Developers Can Help Your Midsize Business