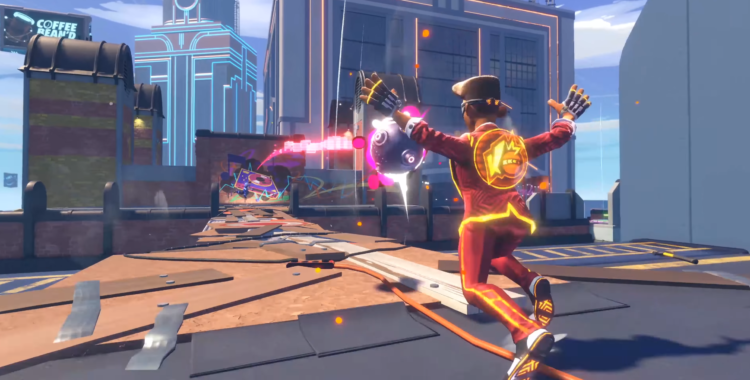 Knockout City is the best team-deathmatch game I’ve played in years. It celebrates and elevates the genre’s roots in ways that make me think I’ve somehow reinstalled my old Voodoo2 GPU. And the game elevates this familiar format all under the guise of family-friendly dodgeball.

I wish describing an online game like that was enough to guarantee its success. But as I’ve learned over the years, a great online game can fail without a boisterous playerbase, an adept publishing hand, or good reasons for friends to keep playing with each other.

Let’s start with all the fun, depth, surprises, and innovations packed into Knockout City, because you might not assume a game about bubbly teenagers throwing dodgeballs has any of that stuff.

Knockout City focuses on team-based deathmatches in a cartoonish metropolis. The default mode, “Team KO,” is a three-on-three fight to the dodge-death, and its weapon-and-ammo proposition instantly feels different than most other online combat games.

Consider how a classic, phys-ed dodgeball game starts. If you can’t remember (or if your PTSD prevents you), check out the classic Freaks & Geeks scene in the above video. Two teams on opposite sides. A row of dodgeballs in the middle. A mad dash upon a ref’s whistle to rush forward, grab “ammo,” and begin pummeling each other in earnest.

Matches in Knockout City begin similarly. Each player starts out empty handed and must immediately rush to find a ball. But instead of a flat gym broken up by a halfway line, Knockout City‘s arenas are large, asymmetrical, and resemble various city zones. There’s a downtown hub full of cars, a construction site, or an empty diner full of rotating doors and platforms. New balls spawn in a few predetermined spots on each map, though these vary enough that you can’t necessarily rely on muscle memory to immediately stock your team up. And you can’t tuck a second dodgeball into your back pocket, either. Players can only carry one.

Hence, once you throw that dodgeball, getting more ammo immediately becomes imperative (and complicated). This is the first of Knockout City‘s many intriguing choices and strategies.

Most of Knockout City‘s best gameplay loops revolve around collaboration. For example, when you pass a dodgeball to a teammate, it lands in their hands at a higher “level,” which means that it can be thrown faster. Staying close to teammates, accumulating at least two dodgeballs, and passing them back and forth is a tantalizing power proposition, and it’s easily attainable through the course of a match. (If two teammates each hold one ball and one passes to another, this neatly makes teammates pass to each other simultaneously for a double ramp-up.)

I should clarify a few details before explaining how a suped-up, pass-crazed duo doesn’t guarantee victory.

“Knockouts” require whittling down a foe’s two hit points or shoving them off a level’s edge into a bottomless pit. Most dodgeball attacks take one hit point; some special ones take two hit points and instantly kill. (The first team to score 10 knockouts wins a round; first to two rounds wins a match.) Players can never heal their hit points, not even when they catch a ball thrown directly at them. You have to die and respawn to get both of your hit points back. Once you have line-of-sight on a foe, you can hold down the “throw” button, see your reticule hover over them, and launch the ball as if it were a homing missile. A thrower has the option to curve it left, curve it right, or lob it—which you’ll need to do in case your homing-aimed shot would otherwise hit a wall or barrier.

Everyone gets a “catch” button, which temporarily opens your hands to catch (and can be done while already holding a ball). But this tactic also leaves you stunned for a moment if you whiff your timing, and foes can exploit this by pressing a dedicated “fake throw” button. The catch window is wide enough to feel fair, though if you nail a “perfect” timing window, that ball instantly revs up to a higher level of speed for the sake of retaliatory throws right back.

So let’s revisit the above situation: two players passing balls back and forth to power their throws up. That’s a powerful way to romp through Knockout City, especially if a duo targets an isolated opponent. (Trying to catch two attackers’ simultaneous volleys is tricky, timing-wise.) But that also means those players are clumped together on the map.

Now might be a good time to retreat for a couple of reasons. Again, there’s no healing, either automatic or via pickups, so you don’t necessarily need to rush to knock out an opponent. Second, when your team is short on dodgeballs, you have a trippy option: turn one of your teammates into a throwable ball. Hold down the “roll” button, as seen in the above gallery, and one of your guys will bundle up, knees tucked, in a way that a teammate can pick up. This human-ball option is a “special” dodgeball that does two points of damage when thrown normally, and it can be suped up via passes to a teammate. But it can also be “super-thrown” as a hellfire-from-above crazy ball. The person who gets thrown this way aims their descent.

So if you’re facing down two opponents playing hot potato to power up, this is a good option to aim at those two jerks. In fact, the super-throw explosion radius is just big enough to catch such a duo and instantly wipe them both out.

That death-from-above attack is loudly choreographed to foes, however, and they can withstand it by either running away or standing beneath cover. If such an attack misses, your nemeses can use their own dodgeballs to peg the temporarily stunned player once they land. But turning a teammate into a projectile is still one way for you to instantly turn the tables on foes who clump too closely, or it’s at least a way to force your foes to scramble and split up so that you might divide and conquer.