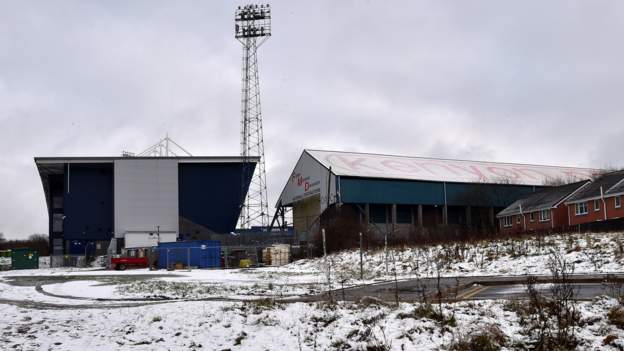 Bristol Rovers against Swindon in League One was one of several EFL games postponed on SaturdayThe Championship games between Rotherham and QPR, and Sheffield Wednesday and Swansea are among more than half of Saturday’s EFL fixtures to be postponed because of frozen pitches.

The League One matches at Blackpool, Bristol Rovers, Crewe and Wimbledon are off, with the games at Lincoln and Oxford United put back until Sunday.

Shrewsbury against Ipswich was postponed at 14:00 GMT on Saturday.

League Two has been worst affected by the conditions, with only two games on.

There may be more postponements as pitch inspections are still being made.

In the National League, fixtures at Dagenham, Maidenhead, Halifax, Solihull, Wealdstone, Wrexham and Woking have all been postponed because of the freezing weather.

Oxford and League One leaders Lincoln, who followed suit on Saturday morning, both hope expected rising temperatures will allow their pitch to thaw out by Sunday.

Oldham organised an early pitch inspection to help out Exeter, who were set to travel on FridayBut Oldham Athletic’s early call off in League Two was a relief to Exeter City, who travelled to Barrow in midweek, only for the game to be postponed an hour before kick-off.

A new date of Tuesday, 23 March has been agreed for the rescheduled fixture.

Carlisle-Crawley was another League Two postponement, a 10th postponement since Christmas for the Cumbrians, while Walsall’s was their third game called off in successive Saturdays.

The postponement of Barrow’s trip to Forest Green was the Cumbrian club’s third call-off because of the weather in less that three weeks.

The Bluebirds have two games in hand on each of their rivals in the battle to avoid relegation from League Two and in a season when fixtures have also been suspended because of Covid-19 cases, boss Michael Jolley believes there may soon be a case for extending the season.

“I think there is a good discussion to be had,” he told BBC Radio Cumbria. “I don’t think we are there yet but if this continues over the next two to three weeks and there are further postponements we might get to the point where there are no further midweeks left for us to put games in.

“Once clubs are reaching that point they will end up playing Saturday-Tuesday-Thursday-Saturday, which is not reasonable and not right. Whether that’s our club or anyone else, that’s a situation we want to avoid.”

Standing Up To Infertility: Rhod Gilbert with a frank, funny and personally revealing look at the conditionScarlett Moffatt Wants To Believe: What is the theory behind ghost sightings and does it prove anything?

The Commercial Space Age Is Here

Raikkonen explains run-in with “pissed off”…

Mexico reports 2,192 new coronavirus deaths in one of…