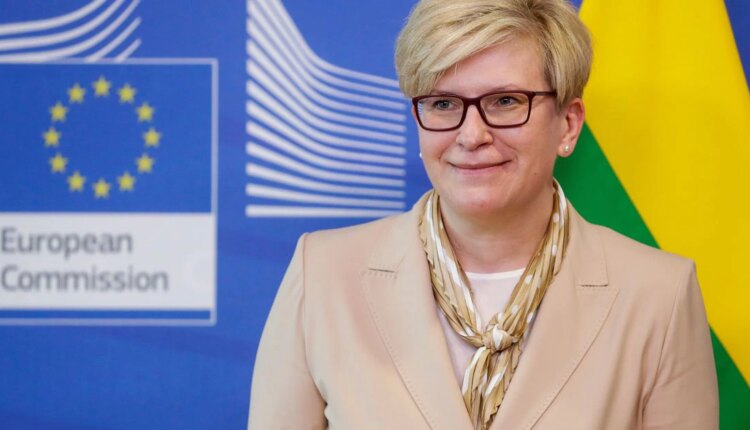 Lithuanian Prime Minister Ingrida Simonyte poses ahead of a meeting at the European Council in Brussels, Belgium June 3, 2021. Stephanie Lecocq/Pool via REUTERS

VILNIUS, Oct 6 (Reuters) – The Lithuanian government on Wednesday proposed to pay 100 euros to people aged 75 or old to take the COVID-19 vaccine, to boost the inoculation rate for the group, which lags in the European Union.

“We are unable to convince them to vaccinate otherwise”, Prime Minister Ingrida Simonyte said during a televised government meeting.

Although 73% of all Lithuanian adults are vaccinated, in line with the European Union average, about a third of over-75s remain unvaccinated, according to government data, one of the worst in EU.

Two-thirds of the 4,965 COVID-19 deaths in the country have been in this age group.

If parliament approves the scheme next week, the government will spend up to 27 million euros to pay over-75s who got their full vaccination between September and November.

The already vaccinated will get the payout if they take a booster shot until end of March next year.

“If this helps at least some people to take the right decision and avoid severe form of the disease, or death – this is an investment worth doing”, Simonyte added.

During the two weeks until Sept. 27, the nation of 2.8 million had the worst rates of COVID spread in the EU, as well as the second worst mortality rate, with 646 new cases and 81 deaths per 10,000 people, a European Commission agency said.

In the United States, officials in the Houston metropolitan area said in August they would pay $100 to any person receiving a first dose of a COVID vaccine, after President Joe Biden called for state, local and U.S. territorial governments to provide such payments to boost COVID-19 inoculation rates. read more

Inside The Irish ‘Hell Caves’ Where Halloween Was Born