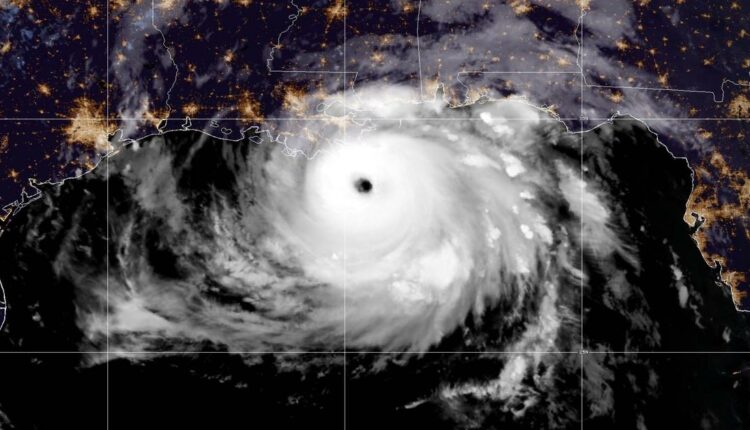 Ida still had maximum sustained winds of 130 mph, meaning it still had Category 4 strength winds. The storm is expected to remain a hurricane through Sunday night and is likely to weaken to a tropical storm by Monday.

Ida is expected to make a turn north overnight, followed by a slightly faster northeastward

Louisiana grapples with Ida and COVID-19

Hurricane Ida made landfall in Louisiana as a Category 4 storm Sunday afternoon. Many hospitals in the area were unable to evacuate, and are instead riding out what’s being called an “extremely dangerous” storm. Louisiana Senator Bill Cassidy joins CBSN’s Lana Zak to discuss what the state is doing to prevent the spread of COVID-19 at evacuation shelters.

3:53 PM
Biden commits “full might” of the country to rescue and recovery after Ida passes

President Biden arrived in Washington, D.C., Sunday afternoon after meeting with the families of U.S. service members killed in Kabul. Mr. Biden visited FEMA’s headquarters for a briefing on Hurricane Ida and its preparations for rescue and response.

“Jill and I are just getting back from Dover Air Force Base in my home state, where we met with the families of 13 fallen heroes in Afghanistan who lost their lives in service to our country,” the president said in remarks. ‘While we’re praying for the best in Louisiana, let’s keep them in our prayers as well.”

The president said Hurricane Ida has “continued to rage and ravage everything it comes into contact with,” and urged Louisiana residents to take it seriously, saying it is a “life-threatening storm.”

“To the people of the Gulf Coast, I want you to know we’re praying for the best and planning, prepared for the worst,” Mr. Biden said. “As soon as the storm passes, we’re going to put the country’s full might behind the rescue and recovery.”

The president said his administration has prepositioned resources, including equipment and response teams, that will be needed after Hurricane Ida passes.

“This is going to be a devastating, devastating hurricane,” he said, encouraging those in Louisiana to take precautions.

Mr. Biden said the federal government is positioned to help the Gulf region recover “as quickly as possible, as long as it takes.”

“Don’t kid yourself,” he said, “this is going to take a lot of resources, a little bit of luck and as my grandfather would say, the grace of God and goodwill of the neighbors.”

Governor John Bel Edwards said at a news conference that there are about 1,500 people sheltering in 23 emergency shelters throughout the state, and that number could grow in the aftermath of the storm as people assess the damage caused by Hurricane Ida.

3:16 PM
Part of a roof blows off in French Quarter

A man passes by a section of roof that was blown off of a building in the French Quaeter by Hurricane Ida winds, Sunday, Aug. 29, 2021, in New Orleans.

Part of a roof in the French Quarter has fallen into the street near the intersection of Decatur and Toulouse streets, CBS New Orleans affiliate WWL reports.

There have been calls for rescue on Grand Isle, but because of deteriorating weather conditions and flooding on Highway 1, Parish President Cynthia Lee Sheng says the people still on the island — about 40 people — will need to wait it out until the storm passes, CBS New Orleans affiliate WWL reports.

The Sewerage and Water Board of New Orleans tweeted at 1:30 p.m. ET that a number of Sewage Pump Stations on both the East and West Bank of New Orleans are experiencing power outages, increasing the potential for sewer backups in homes.

SWB warned residents not to use dishwashers and laundry machines.

Over 167,000 Louisiana residents are without power as of 2 p.m. ET, according to Bluefire Studios, which tracks power outages nationwide.

Jefferson Parish officials said at a news conference that the numbers are changing rapidly.

As Hurricane Ida made landfall at Port Fourchon, Louisiana, New Orleans officials warned residents to hunker down. Mayor LaToya Cantrell told residents “this is the time to stay inside.”

Cantrell and other parish officials said emergency responders would not be able answer calls.

About 260 National Guard members have been sent to the city. A brief 911 outage was reported around 11 a.m. ET, but officials said it was resolved within 10 minutes.

Hurricane Ida made landfall near Port Fourchon, Louisiana, at 12:55 p.m. ET as an “extremely dangerous Category 4 hurricane,” the National Hurricane Center said. Ida had maximum sustained winds of 150 mph and a minimum central pressure of 930 mb as it made landfall.

12:28 PM
Northern eyewall of Ida moving onshore on the coast of southern Louisiana

The National Hurricane Center said Ida’s northern eyewall is moving onshore on the coast of southern Louisiana. As of 12 p.m. ET, the center of the storm was located 25 miles south-southwest of Grand Isle, Louisiana.

While there is the extreme wind warning in effect, FEMA said the storm is already causing catastrophic flooding.

11:41 AM
Extreme wind warning in effect for southern Louisiana

The National Weather Service in New Orleans issued an extreme wind warning for the area around Houma, Bayou Cane and Estelle, telling roughly 290,300 residents to take shelter as winds whip the coast:

An extreme wind warning is in effect for Houma LA, Bayou Cane LA, Estelle LA until 1:30 PM CDT for extremely dangerous hurricane winds. Treat these imminent extreme winds as if a tornado was approaching and move immediately to an interior room or shelter NOW!. pic.twitter.com/3isy5vhpHe

11:10 AM
Louisiana governor says Ida will test state “in ways that we’ve not been tested before”

Louisiana Governor John Bel Edwards predicted Sunday that Hurricane Ida will be a crucial test of the state and its new hurricane and storm damage risk reduction system.

“This is a major, major storm that’s going to test us in ways that we’ve not been tested before, for a lot of reasons, but this COVID situation is certainly one of them,” Edwards, a Democrat, said in an interview with “Face the Nation.”

Edwards said the approaching hurricane will be a “real challenge” for the state’s hospitals. Less than half of Louisiana’s population is fully vaccinated, and the state has high rates of hospitalizations of patients battling COVID-19.

“Evacuating these large hospitals is just not an option because there’s not any other hospitals with capacity to take them,” Edwards said of COVID patients, though he noted the state’s hospitals have stockpiled extra food and fuel for generators in anticipation of Hurricane Ida.

The governor said the state’s modeling shows the $14 billion levee system installed around New Orleans after Hurricane Katrina hit should hold. But there are concerns for those along the coast, where the levees aren’t as fortified.

“This will be a tremendous test of those systems and quite frankly it’s going to be the strongest test we’ve had yet for the current hurricane and storm risk reduction system itself,” Edwards said.

As Hurricane Ida bears down on Louisiana, residents are preparing for a potentially catastrophic storm with life-threatening storm surges and flooding. Correspondent Omar Villafranca reports on preparations in New Orleans:

9:05 AM
“Extremely dangerous” Ida expected to make landfall within hours

The National Hurricane Center says in its 9 a.m. ET advisory that Ida is “extremely dangerous” and is expected to make landfall along the Louisiana coast later Sunday morning or early in the afternoon.

“Catastrophic wind damage is likely where the core of Ida moves onshore along the southeast coast of Louisiana in the next few hours,” the advisory said. The hurricane center said storm surge could reach as high as 16 feet from Port Fourchon, Louisiana, to the mouth of the Mississippi River.

8:46 AM
Hurricanes Ida and Katrina are similar, but tiny differences are key

Hurricane Ida is looking eerily like a dangerous sequel to 2005’s Hurricane Katrina, the costliest storm in American history. But there’s a few still-to-come twists that could make Ida nastier in some ways, but not quite as horrific in others.

Ida is forecast to make landfall on the same calendar date, August 29, as Katrina did 16 years ago, striking the same general part of Louisiana with about the same wind speed, after rapidly strengthening by going over a similar patch of deep warm water that supercharges hurricanes.

What could be different is crucial though: Direction and size.

Katrina hit Louisiana from due south, while Ida is coming to the same part of the state from southeast. A day-and-a-half before landfall Ida’s hurricane-force winds extended 13 miles from the center compared to 106 miles for the much more massive Katrina at the same time before landfall.

“This has the potential to be more of a natural disaster whereas the big issue in Katrina was more of a man-made one” because of levee failures, said University of Miami hurricane researcher Brian McNoldy. Levee failures pushed Katrina’s death toll to 1,833 and its overall damage to about $176 billion in current dollars and experts don’t expect Ida to come near those totals.

The hurricane center said the storm was about 60 miles south-southwest of the mouth of the Mississippi River, traveling northwest at 15 mph.

As all eyes are on Hurricane Ida’s looming landfall on the U.S. Gulf Coast, crews from Florida are heading out to help with power restoration efforts after the storm hits. CBS affiliate WKMG-TV’s Amanda Castro reports: