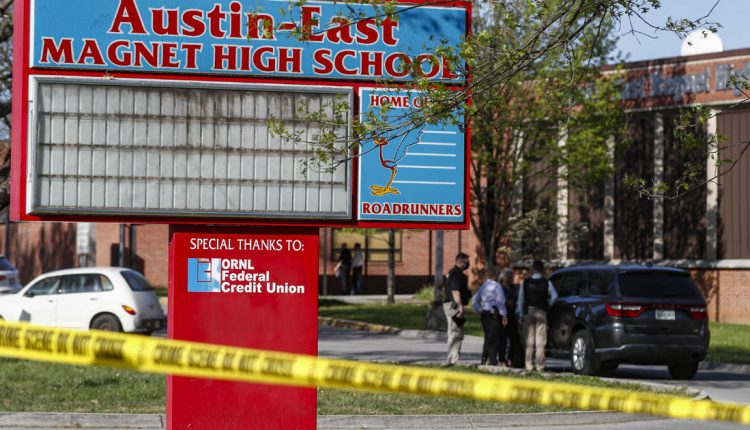 The Tennessee Bureau of Investigation said the person who died at the high school was the subject of the initial call to police. Director David Rausch did not name the person, but said he was a student at Austin-East Magnet High School.

Rausch said that when officers responded to the scene following a report of a person who possibly had a gun, they found the subject of the call in the restroom. Police ordered him out, but he refused.

Rausch said that as police entered the restroom, the subject “reportedly fired shots, striking an officer.” One officer returned fire, and the suspect was pronounced dead at the scene, he said.

Thomas said the community “has suffered tremendously over the last few months,” adding that he’s “so sorry for the losses they have endured.”

Tennessee Senator Marsha Blackburn said she’s “heartbroken” about the shooting, adding that she’s “praying for the community, including the officer injured in the line of duty.”

I am heartbroken to hear about the shooting at Austin-East Magnet High School in Knoxville. My office has been briefed on the situation and I am praying for the community, including the officer injured in the line of duty.

Austin-East Magnet High School will be closed for the next two days as the investigation into the shooting continues, WVLT reported.

One person, identified only as a male, has been detained for further investigation, according to Knoxville police. Police did not provide any additional details about the person.

One person was killed in the shooting, Knoxville police said Monday. The victim has not been identified.

The Austin-East Magnet High School in Knoxville was founded in 1968 and is the county’s only magnet school for performing arts, according to the school’s website.

There are 642 students currently enrolled at the school, which is staffed with 154 employees, including teachers, principals and support staff.

An FBI official told CBS News the bureau is monitoring reports that multiple people were shot at the school. The Tennessee Bureau of Investigation said their agents are investigating the shooting.

The Nashville division of the Bureau of Alcohol, Tobacco, Firearms and Explosives is also assisting local law enforcement.

Knoxville Mayor Indya Kincannon told WVLT that the wounded officer is conscious and “in good spirits.” The officer, who has not been named, is being treated at UT Medical Center.

“He said he’d rather be hurt than anybody else,” Kincannon said.

It’s not clear if the shootings were connected, or if they are related to Monday’s violence.

Several students victims of prior shootings

The Knox County Sheriff’s Office has said there is no active threat to the public, CBS affiliate WVLT reported.

Knox County School Superintendent Bob Thomas tweeted that the school building has been secured. Students who were not involved in the incident have been released to their families, he said.

“We are gathering information about this tragic situation and will provide additional information as soon as possible,” Thomas said.

The school building has been secured and students who were not involved in the incident have been released to their families.

Netflix is working on a live-action Gundam film

Medina Spirit will compete in Preakness after passing drug tests

Coronavirus: What’s happening in Canada and around the world Friday

CBC poll: Results give us an idea of who the vaccine hesitant in Alberta really are