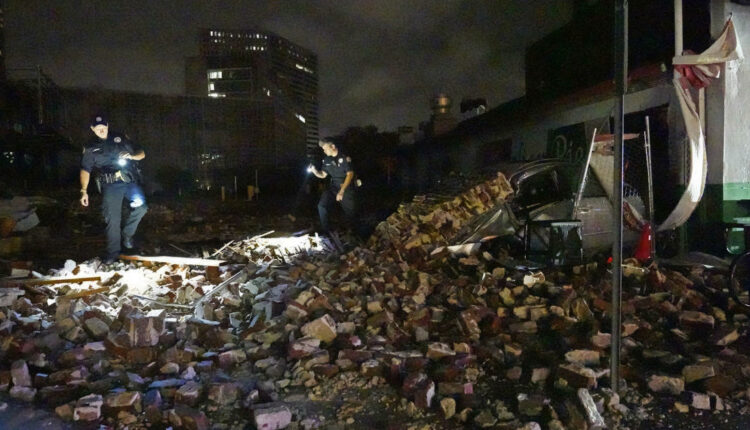 A rapidly weakening but still powerful Tropical Storm Ida was over southwestern Mississippi Monday morning after trudging north through Louisiana. Ida crashed into land as an extremely dangerous Category 4 hurricane Sunday. It was pummeling parts of the two states with heavy rain, a dangerous storm surge, damaging winds and flash flooding, the National Hurricane Center said.

More than a million homes and businesses were hit with power outages in Louisiana, according to PowerOutage.US. The entire city of New Orleans was in the dark.

There were reports of people being trapped in homes. Some levees were breached. Emergency communications lines went out in some spots. Boil water advisories were issued for some communities.

The light of day was bringing the beginning of damage assessments — and rescues.

The hurricane center said Ida could “produce additional rainfall totals of 4 to 8 with localized higher amounts possible across portions of southeast Louisiana into far southern Mississippi. Storm total rainfall accumulations of 10 to 18 inches with isolated maximum amounts of 24 inches is expected.”

Tornados were possible in areas north and east of Ida, forecasters warned.

Ida’s storm surge pushed so much water into the mouth of the Mississippi River that it reversed its flow, U.S. Army Corps of Engineers spokesman Ricky Boyette told The Associated Press.

One death was blamed on the storm but hospitals already stretched to near breaking points by the COVID-19 pandemic were bracing for an onslaught of new patients.

Ida hit on the 16th anniversary of Hurricane Katrina devastating New Orleans. The city’s levees system, which failed during Katrina, has been fortified since then.

New Orleans Police detectives Adam Buckner, left, and Alexander Reiter look over debris from a building that collapsed during Hurricane Ida on August 30, 2021.

Deanne Criswell, administrator of the Federal Emergency Management Agency, urged people needing to be rescued to stay where they are and wait for first responders.

FLASH FLOOD EMERGENCY for St John the Baptist Parish and St Charles Parish. The combination of storm surge and rainfall of 6 to 10 inches of rain is creating a life threatening situation. Please move to higher ground! #LAwx https://t.co/Dul3Nkf2mB

St. John the Baptist issued a statement spotlighting the urgency, saying, “The 911 call center is currently receiving residents calls regarding emergency assistance including evacuations. Please remain in your homes. First responders will deploy as soon as soon as it safe to do so. Please call 911 if you need emergency evacuation assistance.”

The 911 call center is currently receiving residents calls regarding emergency…

5:53 AM
Rapid weakening forecast for Ida

Ida, which made landfall as an extremely dangerous Category 4 hurricane Sunday, was downgraded to tropical storm status early Monday and is expected to be a tropical depression by Monday afternoon, the National Hurricane Center said.

Ida stayed a hurricane for a somewhat unusually long period of 16 hours after coming ashore.

It’s likely to move over central and northeastern Mississippi Monday afternoon and night, then across the Tennessee Valley on Tuesday, the center said.

Ida’s maximum sustained winds were down to 45 mph Monday morning.

The storm was centered about 65 miles south-southwest of Jackson, Mississippi and was moving north at 8 mph.

Twenty-two barges broke loose from their moorings and were drifting on the Mississippi River, St. Bernard Parish officials confirmed Sunday. CBS affiliate WWL-TV has the latest:

At least one person in the U.S. has died as a result of Hurricane Ida, the Ascension Parish Sherriff’s Office announced Sunday night.

“Shortly after 8:30 p.m. deputies received reports of a citizen possibly injured from a fallen tree at a residence off of Highway 621 in Prairieville,” APSO said on Facebook. “Deputies arrived on scene and confirmed that the victim is now deceased.”

4:54 AM
Power outage spreads to all of New Orleans, mayor says

“We have now lost power, citywide! This is the time to continue to remain in your safe places. It isn’t a time to venture out!!” she said.

All eight transmission lines that deliver power to New Orleans were out of service, according to Entergy, the utility for the area, CBS New Orleans affiliate WWL reported.

“Catastrophic damage to our transmission system, all of Orleans Parish is currently without power,” an Entergy spokesperson said.

You’ve Built a Racially Diverse Team. But Have You Built an Inclusive Culture?