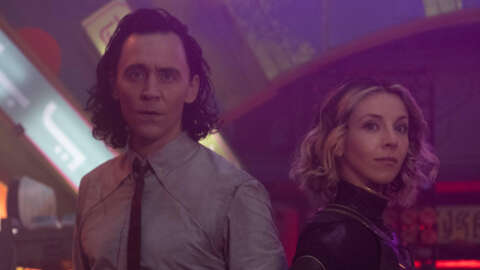 Loki Episode 4 Has A Post-Credit Sequence, Here’s What It Means

The Marvel Cinematic Universe has trained us all to sit through the credits. However, most of us aren’t there to actually watch the credits. We want a little taste of what’s coming next. The same can be said for the Disney+ series Loki.

Episode 4 of Loki has a post-credit sequence you’ll want to wait around for though. After the main credits, more specifically at 44:42, this mindblowing sequence begins. It only lasts 20 seconds, but what happens in those 20 seconds is pretty fantastic, and we’ll explain what it means below.

Warning: Spoilers for Episode 4 of Loki below the video.

After Loki’s apparent death, he awakes elsewhere, in a ruined city, wondering if he’s in Hell. He’s not but he is greeted by three familiar-looking people–and one animal. They’re all Loki variants who have roots within the world of Marvel Comics.

From left to right, you have Deobia Oparei (Sex Education) as Boastful Loki, Jack Veal (The End of the F***ing World) as Kid Loki and Richard E. Grant (Gosford Park) as Classic Loki. There’s also an Alligator Loki–although that’s not credited in the credits. Check out the photo of them below.

What’s the deal with the alligator? There’s no connection to the comics that we know of, but Marvel has plenty of moments of animals becoming superheroes, like the time Loki turned Thor into a frog–known as Throg–in Thor #363. Eventually, Throg became its own character. Maybe Thor found a way to turn Loki into an alligator?

Then there’s the character listed as Boastful Loki in the credits. This seems to be a new character–the one holding the hammer–for the MCU, as we couldn’t find a connection to the comics.

Grant takes on the role of Classic Loki, in a costume that is very similar to the villain’s first appearance in Journey into Mystery #85 from 1962. This was a time when Loki truly was the God of Mischief, a title which has been discussed on the Disney+ show, as it’s not really suited to Tom Hiddleston’s character in the MCU.

Finally, Veal plays Kid Loki. In the comics, Loki died during the Siege of Asgard, sacrificing himself to save his home–which was then floating above Oklahoma… because comics. However, he was reborn in Paris with no memories of his past life–just nightmares about past crimes. Thor restored part of his identity, but Kid Loki wasn’t a welcome sight back in Asgard. The child God of Mischief was around for some time, before he faded out of existence.

As for everything else going on here, it’s obvious that the group of Lokis are on another Earth–one where New York City was destroyed–you can see Avengers Tower on the right. Considering how much the TVA has lied to Loki throughout the series–where the agents come from, who the Time-Keepers are, etc.–it seems like there already is a multiverse and the TVA rods send you to a parallel Earth.

We’ll learn more next week when Episode 5 of Loki airs on Disney+.