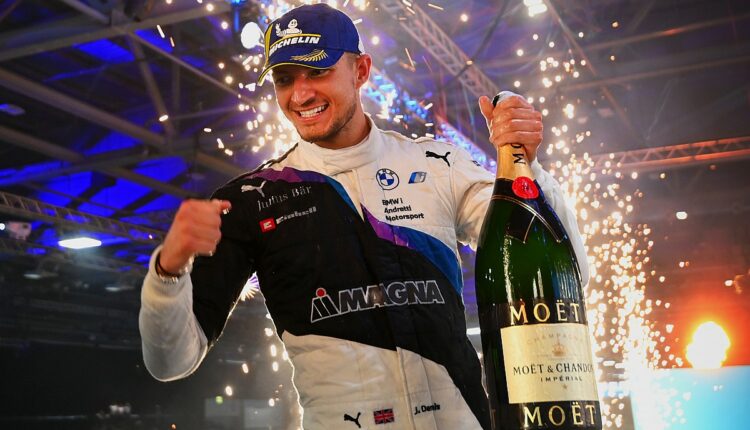 Dennis pounced when polesitter Alex Lynn locked his tyres while he attempted the undercut, which handed the BMW Andretti driver a window to take his attack mode.

Dennis then led with his 35kW boost in dominant style, driving around a late race vibration to secure his second Formula E victory in his maiden season, crossing the line over 5s clear.

Lynn had made a sound start aboard his Mahindra Racing machine from the front row, moving across the course to defend the position into the Turn 1 left-hander. That allowed Lynn to control the race at his own pace, with Dennis complaining that Lynn was too slow through the sequences of tight hairpins and delaying the entire train of cars.

Valencia race two winner Dennis and his team then opted to drop an attack-mode strategy, instead playing it loose and responding only when Lynn moved for his power boost. The pair then dived in unison through the gate at Turn 16 to activate the 35kW boost, which ran for eight minutes – having never been more than four minutes in Formula E history.

That allowed Lynn to stay firm at the front, but the two then split their strategies at the second attack mode activation, with Dennis staying on the racing line to nick track position. Dennis was set to take his attack mode on the following tour, only for a brief Turn 10 yellow flag to scare his race engineer into aborting and then swiftly again green-lighting the move.

This was to avoid letting the power boost go to waste should the yellow flag have developed into a full safety car, which it did not.

Dennis reacted too late to the radio call and missed the attack mode after his race engineer eventually settled on a decision, but that would come to help Dennis triumph. As Lynn closed up to the BMW Andretti racer with his attack mode, he locked up into the Turn 10 hairpin and that delay gave Dennis a window to move off line without ceding track position.

When Lynn switched back to the lower 200kW race power, Dennis had much of his attack mode remaining to streak into the lead and then he overcame a right-rear vibration. Despite Dennis’ concerns over team radio growing increasingly urgent, he never lost lap time and converted the win by 5.3s as Lynn suffered on his ailing rubber.

That allowed Mercedes’ Nyck de Vries, up from ninth thanks to opportunistic passing on third-starting Sebastien Buemi, to nip past the Mahindra Racing driver on the inside of Turn 10.

The Mercedes driver flung his car down the inside and made the very slow apex, forcing Lynn to run wide and slip down to an eventual third as he works to find another new seat in time for the 2022 season, with his Mahindra career set to come to a swift end.

Buemi was much improved with a fourth place, but still struggled for pace aboard his Nissan e.dams machine and was a cork in the bottle that delayed Andre Lotterer for Porsche.

He was then trailed by the two Audis, who endured a messy race after opening-lap contact for Rene Rast while Lucas di Grassi was at fault for a tag with fourth-starting Sergio Sette Camara.

Stoffel Vandoorne bagged points in eighth to signal a marked recovery for Mercedes to end its torrid run of form, while reigning champion Antonio Felix da Costa sealed ninth late on with a fanboost-enabled pass on Norman Nato into Turn 1. However, the Venturi Racing driver would run out of useable energy on the final lap, dropping to 21st and handing Oliver Rowland the final position in the top 10.

Although Bird retains his drivers’ championship lead for Jaguar Racing, he was forced to pit at the end of the first lap when he was sandwiched through Turns 4 and 5.

That dealt him front-left suspension damage, which could not be repaired and he was eventually retired from the race.

But as Dennis climbs to second in the points, Bird’s quest to keep first place in the table was aided by Robin Frijns failing to score after a scrappy race down in 15th place.