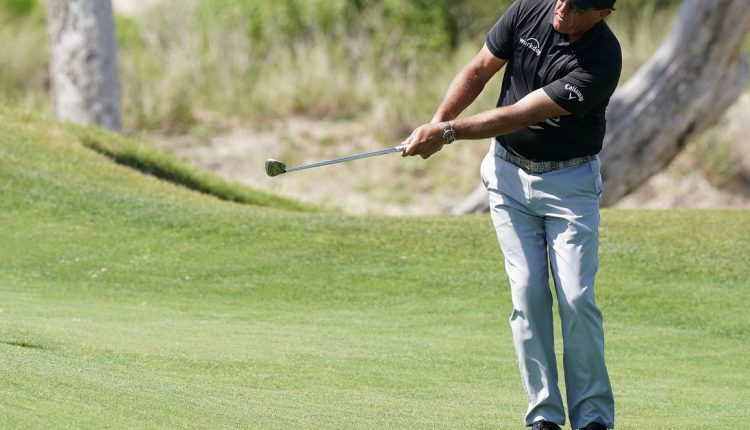 Phil Mickelson has five major championships to his name and an estimated nine-figure net worth, but he is not immune to brain-fade issues as he deals with the vagaries of middle age.

After moving within sight of history by taking a share of the second-round lead with Louis Oosthuizen at the PGA Championship at the age of 50 on Friday, Mickelson spoke about his tricks for staying mentally sharp.

To listen to him, mental issues more than physical deterioration make it difficult for middle-aged players to contend in major championships.

“I’m just making more and more progress just by trying to elongate my focus. I might try to play 36, 45 holes in a day and try to focus on each shot so that when I go out and play 18, it doesn’t feel like it’s that much,” Mickelson said.

“I might try to elongate the time that I end up meditating, but I’m trying to use my mind like a muscle and just expand it because as I’ve gotten older, it’s been more difficult for me to maintain a sharp focus, a good visualization and see the shot,” he added.

“Physically I feel like I’m able to perform and hit the shots that I’ve hit throughout my career, and I feel like I can do it every bit as well as I have, but I’ve got to have that clear picture and focus.”

Mickelson is only the second player aged 50 or more to hold the second-round lead in a PGA Championship, joining then 54-year-old Sam Snead, who went on to finish sixth in 1966.

Fred Couples is the most recent player 50 or higher to have a halfway lead in a major (2012 Masters).

Mickelson’s late charge came after he made a minor putting adjustment that helped him pile up five birdies on his back nine for an inward half of 31, a stiff breeze proving no problem at Kiawah Island.

He delivered a suitable exclamation at the par-four ninth – his final hole – where a spectator shouted “get in the hole” as Mickelson’s 22-foot putt rolled towards the cup before obeying the command and toppling in.

It would have been nice to have heard more from Mickelson about his thoughts of leading and having a chance to supplant Julius Boros, who was 48 when he won the 1968 PGA title, as the oldest major champion.

But the often-loquacious Mickelson told a PGA official that he would only attend an outdoor press conference on the condition that it be limited to three questions.

In the end, he answered four before departing after less than four minutes, clearly preferring on this day at least to let his clubs do the talking.