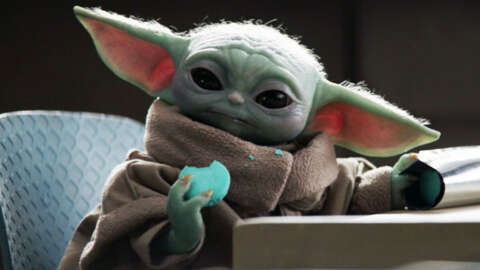 Quick: What’s the cutest thing you’ve seen in the last year? That’s right, it’s Grogu, also known as Baby Yoda, stuffing his face with blue space cookies. Funko knows it, and wants you to give into temptation with its new Mandalorian collection.

Funko’s latest collection of Star Wars Funko Pop vinyl toys includes six standard figures, one “chase” figure, and three retailer-exclusive ones. The standard collection includes Grogu eating macarons; Mando himself–sans Mandalorian helmet–holding Grogu; Ahsoka Tano wielding dual white lightsabers; the robotic Dark Trooper; Boba Fett as he appears in The Mandalorian, and Mandalorian Bo-Katan Kryze without her helmet. Bo-Katan Kryze is also the “chase” figure, a variant figure inserted randomly throughout its production run. The variant is the same figure but wearing her helmet. The retailer-specific variants are Grogu with a butterfly available at GameStop, Grogu with a squid stuck to his face through Target, and Ahsoka Tano with her hood up through Amazon.

Here are the new Funko Pops, available for pre-order through Amazon now.

What’s New On Peacock in June