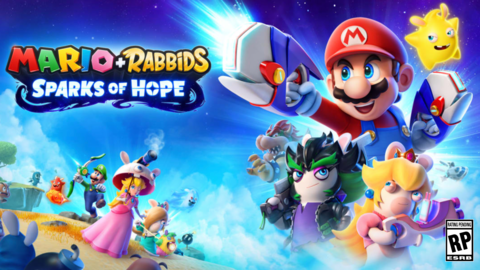 Ubisoft has officially announced Mario + Rabbids: Sparks of Hope, the sequel to 2017’s Kingdom Battle, at its Ubisoft Forward presentation (which officially kicked off the all-virtual E3 2021). The confirmation comes after the game leaked on Nintendo’s website earlier on Saturday.

The sequel is coming in 2022 with characters like Mario, Luigi, Princess Peach, Rabbid Peach, Rabbid Luigi, and more. They’re on a “galactic journey to defeat a malevolent entity and save your Spark companions.” The game’s description adds: “Explore planets throughout the galaxy as you uncover mysterious secrets and compelling quests!”

Sparks are the name for new characters formed by Lumas and Rabbids fusing together. Mario and company are traveling the galaxy to save each planet, rescue these Sparks, and defeat the villainous Cursa.

There will be nine characters in all (at launch, at least), along with new bosses and “some familiar enemies” to battle. Players will be tasked with rescuing “adorable Sparks” who live in the galaxy, and who give you “distinct powers” to use in battle.

There is a new combat system in Sparks of Hope, too. Battles take place through real-time action and turn-based tactics, which is a change from Kingdom Battle. “You can move freely in a designated area and take cover, team jump on your allies, or dash at your enemies, all in real time within the Hero’s turn,” Ubisoft said.

There are “dozens” of Sparks to collect, and each has a unique ability and power.

You can get a closer look at Sparks of Hope through the cinematic trailer below, while a gameplay sneak peek has also been published. It shows off some of the new locations, abilities, and characters that will appear in the sequel. The original Mario + Rabbids (Mario + Rabbids: Kingdom Battle) was initially released in August 2017, and was one of the best reviewed games for the Switch during it’s early days. We gave the game a 9/10 score in our review, with reviewer Edmond Tran saying the game was a “consistent delight, no matter how challenging the road becomes, because Kingdom Battle’s unique turn-based tactics system is in every way a pleasure to engage with.”

and yes I am scoring Mario + Rabbids Sparks of Hope! I had to request that @DavideSoliani would not be allowed to be a Diva like last time but alas he’s already started!🤣