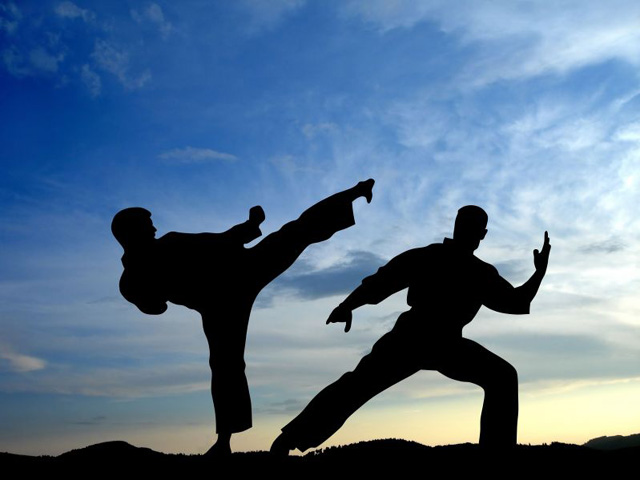 Christians need to be very careful in the decisions they make regarding their recreation. Many Christians dismiss all martial art training as diabolical and unfit for Christian practice. As a Christian myself and a martial art instructor I agree that it is better to leave something alone if you are uncertain, rather than dabble in ignorance.

This article will discuss two main points. The first part will try to prove that it is biblily acceptable to train in the martial arts as long as the focus is right. But even if there are no religious aspects to a martial art, martial arts still teach people how to hurt someone and even to kill. Does not this prove that martial arts are unacceptable for Christian practice? The second part of this article will elaborate on exactly this point, showing that a Christian instructor must do more than just keep Eastern religious teachings from the dojang (practice hall) in an effort to keep it biblically permitted.

Other than the health benefits associated with the good overall exercise, there is just one reason that makes martial art training an acceptable recreation for the Christian student and that is the preservation of yourself and your loved ones. In other words self-defense. The Bible promotes peace with your neighbor, which is the foundation of the all Christian doctrine; namely, Love – ie selflessness.

I would like to use two passes that would prove self-defense a valid option for Christian people. It must be stressed that in context both these paths does not dictate earthly struggles, but rather spiritual readiness, yet the principles are the same.

In Ezekiel chapter 33 God gives the prophet a parable, saying:

“Son of man, speak to the children of thy people, and say unto them, When I bring the sword up a land, if the people of the land take a man of their coasts, and set him for their watchman: If he he seeth the sword come upon the land, he blow the trumpet, and warn the people; Then whosoever heareth the sound of the trumpet, and taketh not warning; if the sword come, and take him away, his blood shall be upon his own head He heard the sound of the trumpet, and took not warning; his blood shall be upon him. But he that taketh warning shall deliver his soul. ” Ezekial 33: 2-5.

It would help nothing if the citizens hear the trumpet and although they took note of it, went back to sleep or whatever they were doing prior to the sound, would it? No, the logical thing would be to prepare for the oncoming battle, flee if possible, and if it comes down to it, fight for survival.

The other passage is a parable by Jesus:

“But know this, that if the good man of the house had known in what watch the thief would come, he would have watched, and would not have suffered his house to be broken up.” Matthew 24: 43.

This is the same principle as the aforementioned passage. It would be logical to accept that the good man of the house would keep the thief from his house and family using even force if need be. The burglar do not come with good intend and even in a supposedly civilized age as we live in we can assume that the thief will not be satisfied with just stealing everything you have, but will also rape and kill you and your loved ones.

The God thatave all animals some method of self-defense (the porcupine its thorny hide, the octopus a squirt of ink, the wasp a sting, the insect a poisonous taste), has also given humans a means of self-defense and that is the ability to think, to learn and to use the best method applicable. This may be turning the other cheek if that would shame your assailant or running away if you have a choice, or standing your ground as a last resort. God has more use for living Christians that can still spread the Gospel and reflect His light than for dead Christians that allowed their own demise due to negligence.

This should be sufficient proof that learning martial arts for self protection can be considered a biblically acceptable recreation. Many proof of martial art knowledge can be read in the Old Testament, especially considering that when the Israelites went to war they did so with spears and swords and armor. Think for example of Saul that offered David his sword and heavy armor (I Samuel 17:37, 38). It would be ignorant to think that the Israelites had weapons but without any knowledge of how to use them. In fact David is described as a man of war:

“Then answered one of the servants, and said, Behold, I have seen a son of Jesse the Bethlehemite, that is cunning in playing, and a mighty valiant man, and a man of war, and prudent in matters, and a comely person , and the Lord is with him. ” I Samuel 16: 18.

This brings me to the second part. As a Christian instructor I have an obligation to have my dojang reflect my Christian beliefs. Learning the martial arts in order to hurt someone is not Biblical. Learning it in order to protect yourself, even if as a result you hurt your assailant, is. This is where the fine line between a Christian and a non-Christian dojang is set. It is a paradigm shift from fighting to protecting.

Every aspect of your training should reflect this. If you are training sparring it should be in order to teach certain principles about self-defense which you could not otherwise have learned. If you teach how to break an arm it is not with malicious intent, but as a resource in protecting yourself or your loved ones. The idea of ​​hurting someone should never overshadow the idea of ​​protecting yourself with as little conflict as possible.

To retreat when the opportunity arises is always the better option, and this must be made clear to students learning martial arts . Fighting is always the last resort. The student should be taught not to use more force than which is needed to take control of the situation. To break the knee of a pickpocket is absurd, but breaking the knee of rapist may not be.

A big pitfall in the martial arts is that the student may start to believe that he is so good that he is infallible. The Bible makes it clear that victory is not of your own accord. “The horse is prepared against the day of battle: but safety is of the Lord.” Proverbs 21:31. Although one has to prepare oneself, it is God that brings victory. “For I will not trust in my bow, neither shall my sword save me. But thou saved us from our enemies, and hast put them to shame that hated us. Selah. ” Psalm 44: 6-8.

In the moment of battle all trust should be in the Lord, because: “Blessed be the Lord my strength, which teacheth my hands to war, and my fingers to fight:” Psalm 144: 1. If you trust in Him, God will use your abilities to his glory, and He will protect you. “In famine he shall redeem thee from death: and in war from the power of the sword.” Job 5:20. “Though an host should encamp against me, my heart shall nor fear: though war should rise against me, in this will I be confident.” Psalm 27: 3.

If we as Christians learn First Aid, we too may learn self-defense. In both cases it is our hope that we should never have to use this knowledge. And as with First Aid, the focus of Christian martial artist should be on preserving and protecting life.

Phone Sex – a Secret Yet Viable Home Based Business