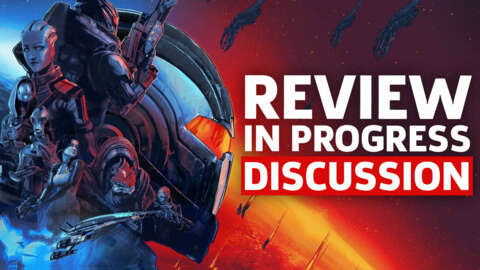 Mass Effect: Legendary Edition is finally here, giving both newcomers to the series and longtime fans a way to experience developer BioWare’s acclaimed action-RPG trilogy with remastered visuals and quality of life improvements.

The video above is an excerpt of episode 93 of the GameSpot After Dark podcast, in which Jean-Luc Seipke, Tamoor Hussain, Lucy James, and Jordan Ramée all get together to discuss their early impressions of Mass Effect: Legendary Edition. Don’t worry, the crew doesn’t go into story spoilers–the conversation sticks to analyzing developer BioWare’s adjustments to the trilogy, specifically Mass Effect 1.

Most of the big changes in Legendary Edition’s Mass Effect 1 are to the game’s combat. Though it still doesn’t quite match its two sequels in terms of shooting mechanics and squad management, the remaster still introduces quite a few welcome adjustments for the 14 year old game, which makes it much more approachable by modern day standards. If the combat was putting you off from trying the game before, it’d be wise to give it an earnest playthrough with the Legendary Edition.

Beyond combat, the Legendary Edition also improves Mass Effect 1’s load times and enhances the visuals with higher resolutions, improved assets, and better frame rates. Most of the adjustments to environments, lighting, and visual style seem to be made with the intent of better aligning Mass Effect 1’s visuals with that of Mass Effect 2 and Mass Effect 3, for better and for worse. When it comes to characters, the remaster has done wonders with adding additional detail to its alien characters, though not all humans look as good. They’re very…shiny.

Mass Effect: Legendary Edition is available for Xbox One, PS4, and PC. The remaster can be played on Xbox Series X|S and PS5 via backwards compatibility as well.