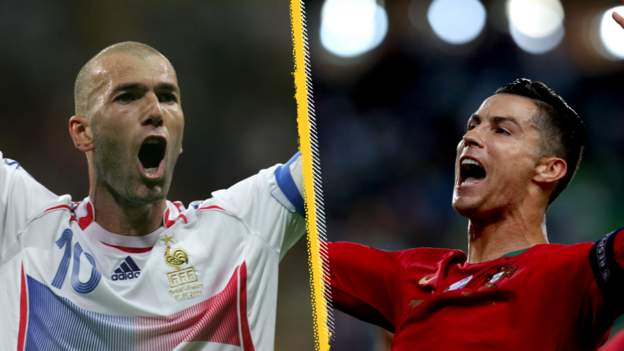 Cristiano Ronaldo is the joint all-time leading goalscorer in the Euros – but does he make the cut?Euro 2020 will be the 16th European Championship – and some of the greatest players of all time have graced the tournament down the years.

So who would make your greatest Euros XI? Gary Lineker, Alan Shearer and Micah Richards discussed their choices in the latest Match of the Day: Top 10 podcast.

To hear how they made their final selections, make sure you listen to the podcast on BBC Sounds.

Goalkeeper: Iker Casillas (picked by both Richards and Shearer)Iker Casillas won the European Championship twice – in 2008 and 2012 – and was capped 167 times by SpainShearer: 167 caps – wow! I know he’s played in a great team with some great players, but still. To be around for that amount of time, to have that success – what a career.

Lineker: You couldn’t have played that way back in our day, with the pitches the way they were.

Perhaps if you just picked the best goalkeeper for this XI, you might have gone for Peter Schmeichel – but this is based on the European Championship.

Right-back: Lilian Thuram (picked by Richards)Lilian Thuram is France’s most-capped male footballer and was part of the side that won Euro 2000Richards: He could play full-back and centre-half. I remember when Patrick Vieira first came to Manchester City in 2010, he told me: “You remind me of Thuram so much. If you just focus, you could have the same career.” I saw him about five years later and he went: “What happened to you?” He really did!

Lineker: Well if he comes to see you now, you can say: “Look at me now – on the Match of the Day Top 10 podcast.” What better place to be?

Centre-back: Sergio Ramos (picked by Richards and Shearer)Sergio Ramos has played for Spain at three European Championships, winning it in both 2008 and 2012Lineker: If you’re talking about goalscoring central defenders, you’ve got probably one of the greatest of all-time here. He’s scored more than 100 goals in his career.

Richards: The only thing about Ramos is all the red cards and yellow cards he’s received. He’s had loads of red cards – but he’s played a lot of games.

He could play both right-back and centre-back. When I first came through, I was playing both. The full-backs weren’t really allowed to go past the halfway line but it’s evolved since then.

Centre-back: Franz Beckenbauer (picked by Shearer)Franz Beckenbauer played in two European Championships, and won the World Cup as both a player and manager with West GermanyShearer: I did think of having Ronald Koeman in this XI, but I just couldn’t get past Beckenbauer.

Richards: What year did Beckenbauer win it – 1972? If I put Beckenbauer in my team, people are just going to laugh at me.

Left-back: Paolo Maldini (picked by Shearer)Paolo Maldini, who won 126 caps, was Italy captain for eight years and was a finalist at Euro 2000Shearer: What a career – so long, so successful. He was very elegant in the way he played and the way he looked. He was a brilliant, left-sided defender. Superb.

Lineker: What a player. He won everything. I have to agree with that choice, Alan.

Midfield: Xavi (picked by Richards and Shearer)Xavi was another member of the Spain side who won Euro 2008 and Euro 2012 – and was player of the tournament at the first of thoseLineker: No Steven Gerrard? No Paul Scholes? Where are they?

Richards: I’m going winners only – you don’t get anything for second best.

Shearer: When you look at some of the midfielders in the running, they were very special. I know Paul Gascoigne was – some of the things he used to do on and off the pitch were outrageous, but he hasn’t made my team.

Central midfield: Lothar Matthaus (picked by Shearer)Lothar Matthaus played in four European Championships – three with West Germany and one with GermanyShearer: He was the rock at the back for Germany – very good. He might not be as sexy as a lot of the players on this list, but if you’re looking for someone you can rely on and who can do a job for you in midfield, he would be the one.

Lineker: The great German engine. He was a very similar player to Bryan Robson. He would score you a goal, defend, get up and down.

Midfield: Michel Platini (picked by both Richards and Shearer)Platini is the joint leading all-time goalscorer at the Euros with nine, and won the tournament with France in 1984Shearer: It could have been Andres Iniesta, but you have to find a place for Platini in your all-time XI.

Lineker: His record in the Euros – scoring nine goals in a tournament from midfield – is extraordinary.

Forward: Zinedine Zidane (picked by both Richards and Shearer)Zinedine Zidane won Euro 2000 with France and was named player of the tournamentShearer: I’m playing Zidane up with the attackers in my team. With his ability, he can play where he wants. He was the best player I ever played against.

Some of these attackers were just outrageous – so much ability. It’s a brilliant list of players going forward and all of them would score goals today, as they did then. They’d be brilliant now and they were brilliant then.

Forward: Cristiano Ronaldo (picked by both Richards and Shearer)Cristiano Ronaldo, who won the tournament with Portugal in 2016, needs just one goal to become the all-time outright leading goalscorer at the EurosLineker: The absolute must-pick is Ronaldo, because he can’t not be in anybody’s team. He’s certainly in the greatest European side of all time, no question.

Richards: Look at this for a front three in our all-time XI – magnificent.

Richards: We don’t need to defend – we play football. Typical English negativity – we need to attack!

Forward: Marco van Basten (picked by Shearer)Marco Van Basten scored a stunning goal in the Netherlands’ 2-0 victory over the Soviet Union in the 1988 European Championship finalMarco van Basten scored one of the most iconic goals in the history of the European Championship with a spectacular angled volley in the Euro 1988 final as the Netherlands beat the Soviet Union.

Shearer: I just think of that goal – that volley in final. That was incredible. That’s why he’s in my team.

Richards: That was amazing.

Lineker: So where are you playing Ronaldo then?

Shearer: As Kevin Keegan used to say to us at Newcastle: “Just go out and enjoy yourselves, lads. Go and play. Do what you want to do.” Maybe that’s why we didn’t win anything!

MOTD Top 10 Euro Specials: The players and moments that have lit up the tournamentsTracking down Bear Grylls: Jamie and Spencer get hold of the renowned adventurer