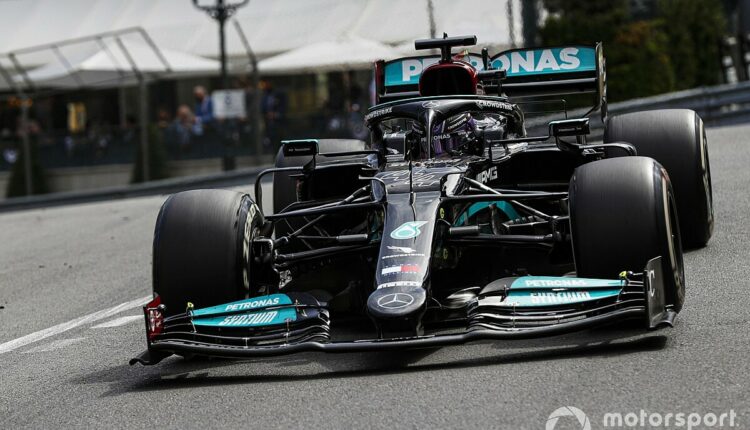 Mercedes F1 boss Toto Wolff said on Saturday that the team would be willing to take risks with Hamilton’s strategy after he only qualified seventh.

Hamilton ran sixth in the opening stint after Charles Leclerc failed to start, and was brought into the pits at the end of Lap 29 to switch to the hard compound tyre.

The move aimed to give Hamilton the undercut on Pierre Gasly, but AlphaTauri kept its driver ahead by bringing him in one lap later, sparking frustration from Hamilton on team radio.

Things went from bad to worse for Hamilton when Sebastian Vettel and Sergio Perez were both able to get the overcut, leaving the seven-time world champion down in seventh once again.

Wolff explained the thinking behind Mercedes’ strategy after the race, saying the team believed the undercut was the best way to try and get ahead of Gasly.

“I think the undercut was the only chance that we had,” Wolff said when asked by Motorsport.com about the strategy call.

“We saw the tyre that came off, and there was nothing left, similar to Valtteri [Bottas]’s car.

“There was some communication between him and the strategists, are we undercutting, and we felt the undercut had much bigger potential to kind of jump Gasly. And it wasn’t enough.”

Hamilton was heard venting his frustration over the radio that he had lost places to Vettel and Perez, asking why he had saved tyres on his first stint before coming in early.

He spent most of the remaining laps stuck behind Gasly, but later said it was “pointless staying up his backside for no reason,” prompting a late stop to get fresh tyres and to score the fastest lap.

Mercedes technical director James Allison said he “can understand why he is unhappy”, but explained that the team was concerned that Hamilton would be stuck behind Gasly for too long.

“It is always a finely-balanced call and today we picked the wrong one of those two options,” Allison said.

“Lewis still had some rubber left on the tyre for what would have been a few decent laps. But the chances are that Gasly wouldn’t have stopped anytime soon. and our fear was that Gasly was going to simply just stay out there as a road block forever.

“We didn’t have good options either way. We had to make the undercut stick in order to then stop the world falling on our heads as it did today.

“Sadly by choosing the undercut and not making it work, the world did fall on our heads with the subsequent loss of places to Vettel and to Perez.”

The day Rosberg and Hamilton’s F1 relationship blew up