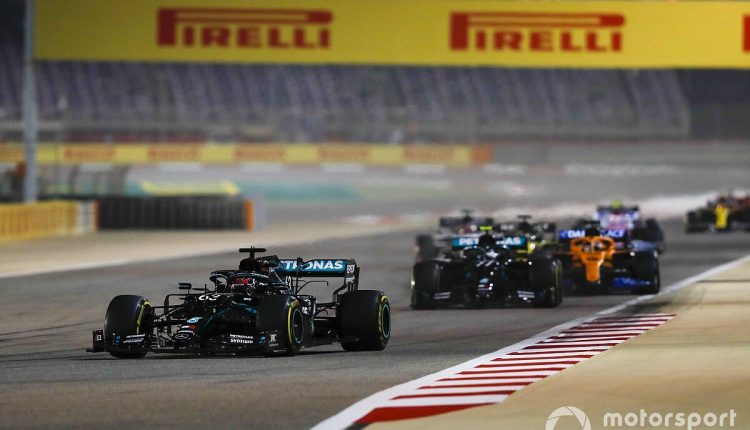 Seven-time world champion Hamilton was forced to miss last weekend’s Sakhir Grand Prix after testing positive for COVID-19, paving the way for Williams driver George Russell to replace him for the weekend.

Hamilton has been in self-isolation in Bahrain since his positive test, with the 10-day period ending on Thursday.

The Briton said earlier this week that he was back in training and “feeling great” after previously struggling with symptoms.

The FIA’s press conference scheduled for this weekend’s season finale in Abu Dhabi lists Russell as appearing for Mercedes on Thursday, with his Williams replacement Jack Aitken also due to return.

But Mercedes has made clear it is not an indication that Russell will definitely race this weekend, with the priority going to Hamilton should he be declared fit to race.

“There are still some question marks over who will be in the car this weekend in Abu Dhabi,” said team principal Toto Wolff in his Abu Dhabi Grand Prix preview.

“Lewis’s condition is improving, but we won’t know until closer to the time if he will be driving.

“We’ll do everything we can to get him in the car and we know he’s determined to be back as soon as possible.

“But his health is our main priority, so we will see what the situation is and then make the call.”

Hamilton requires four negative tests in order to get into the United Arab Emirates for the weekend, as well as permission from government officials who oversee strict entry requirements for the race.

The entire F1 paddock is in a lockdown on Yas Island, where the circuit is located, after arriving on special charter flights from Bahrain.

Mercedes can theoretically leave it as late as qualifying to make a decision on who will be in the car for the weekend. Nico Hulkenberg stepped in at Racing Point without any practice for the Eifel Grand Prix in October.

Mercedes also confirmed in its race preview that it will be adjusting its car livery for Saturday and Sunday in Abu Dhabi to incorporate all of the team member names.

“We have a very special surprise this weekend in Abu Dhabi for our team members,” Wolff said.

“We’ll be running a slightly different livery on Saturday and Sunday featuring everyone’s name on the car to honour the huge commitment and determination from everybody in Brixworth and Brackley.

“Everyone has pushed hard this year, raising the bar through this massively intense season, and we hope this gesture goes some way in showing the appreciation we have for everyone involved.”