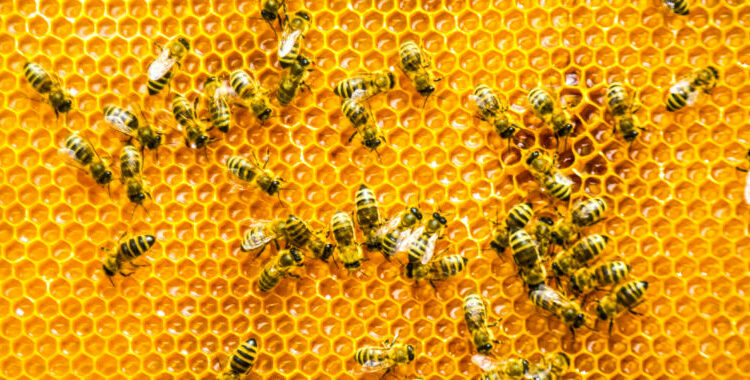 Mergers, twists, and pentagons: The architecture of honeycombs

Bees manage some impressive feats. They not only remember the location of good food sources, but they’re able to communicate this information to their peers. They also care for their hive’s young and organize attacks against intruders.

They’re brilliant builders, too. Almost every honeycomb in a hive is a perfect hexagon, with each side the same length. This is despite the fact that bees have to build hexagons of different sizes for workers and drones, and they often merge honeycombs started on opposite walls of the hive. How do they manage these complexities?

A new paper uses an automated image-analysis system to identify the different ways that bees manage these transitions. The researchers who made the system find that bees see issues coming in advance and start making smaller adjustments that, in the end, help avoid the need for larger changes.

The bees in question are honeybees, although a number of other species create hexagonal structures. The regularity of the honeybees’ hexagonal arrays was noted as far back as the 5th century CE, and more recent measurements suggest that there’s very little variation among most of them: each side of the hexagon is usually very close in length to the other ones.

This happens despite a number of major challenges. To begin with, multiple workers contribute to the constructions of each honeycomb, so the regularity can’t just be explained by having a single worker engage in a series of instinctual movements. In addition, nests need two different-sized honeycombs, as they use distinct sizes for workers (most of the nest) and drones (males used for reproduction). Finally, honeycombs are often built as multiple units, starting from different areas of the hive and ultimately meeting in the middle somewhere.

To find out how all these issues are managed, an animal behavior specialist (Auburn’s Michael Smith) got together with two computer scientists from Cornell: Nils Napp and Kirstin Petersen, who work on insect-like robots. Combined, they put together image-analysis software that could identify the boundaries of each cell, and they figured out the cells’ basic statistics—number of sides, length of each side, etc. These could then be classified based on whether they were the right size for workers or drones or whether there was something unusual about the cell.

Most of the cells in a given comb were for the most-needed offspring. That means workers, which are typically smaller. But prior to the onset of building cells for drones, the workers would start constructing slightly larger cells, allowing for a smooth transition in size. This transition only required a couple of cells to manage, and it covered an area that’s physically smaller than the reach of a worker’s legs.

Managing the merger of different honeycombs was substantially more challenging. This is when cells with an unusual number of sides ended up being needed. The image-recognition system identified cells with anywhere from four to nine walls, instead of the typical hexagon. These were rare, accounting for under 5 percent of all the cells in a honeycomb. But they tended to occur either at the edges of the comb or in discrete stripes where two combs were merged.

Even when it wasn’t possible to make a six-sided cell, the bees tried to get as close as possible, as 93 percent of the oddities were either five or seven sided. Often, the two were paired together; borders between cells with five and seven sides were more frequent than pairings of two five-sided cells or two seven-sided cells.

A major reason that these odd-sided cells were necessary is that the bees will start building at different sites by making honeycombs with different orientations. Thus, as these different segments grow to meet each other, their hexagonal arrays will be oriented with incompatible angles. The larger the angle, the more often nonhexagonal cells need to be used. In the most extreme cases, over half the cells along the line where the honeycombs merge have something other than six sides.

But bees manage to see the problem coming, and they start twisting the hexagons before the different honeycombs meet.

The researchers summarize what they saw rather neatly.

“The bees effectively ‘roll’ the hexagonal cells into the gap when merging combs,” they wrote. “If the tilt difference is small, these rolling cells can maintain their hexagonal shape, but when the tilt difference is large, the bees use nonhexagonal shapes to merge the combs.” And remember, all of that is layered on top of the complexity of managing two different sizes of cells.

All of this, to the authors, suggests that the comb-building process isn’t purely instinctual. There must be what they term “cognitive processes” involved in the construction. The bee’s brain is far removed from anything that we understand well (the closest species we know intimately is probably the fruit fly Drosophila). That makes figuring out what those processes might look like a challenge.