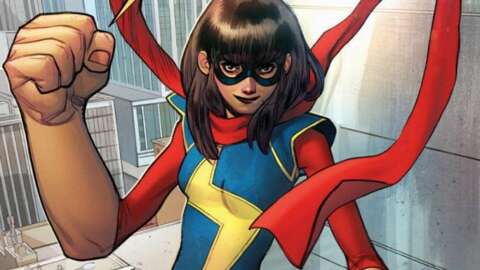 Ms. Marvel, as well as her friends and enemies, are relative unknowns compared to names like Iron Man and the Hulk, but that’s set to change later this year when Ms. Marvel debuts on Disney+. Ms. Marvel is currently in and has now added a new cast member: actor Laurel Marsden will play Zoe Zimmer on the show, according to a report from The Hollywood Reporter.

Marsden is a relative newcomer with a short horror film called Contempt and a show from Quibi (RIP) called Survive on her resume. Mardsen’s character is a frenemy of sorts to protagonist Kamala Khan in the comics–a tall, blonde, popular girl who bullies Kamala and her friends. She ends up being the first person Kamala saves after the Terregenesis event that gives Kamala her powers, though, and the two become friends.

Ms. Marvel stars Iman Vellani as teenage hero Kamala Khan, with Bisha K. Ali acting as head writer. Directors on Ms. Marvel include Bad Boys For Life directors Adil El Arbi and Bilall Fallah, as well as Academy Award-winning documentarian Sharmeen Obaid-Chinoy and Meera Menon, who has directed episodes from a whole host of different shows including The Punisher, Titans, The Walking Dead, and more. Ms. Marvel is expected to join Marvel Studios’ slate of Disney+ shows, which began with last month with WandaVision, in late 2021.