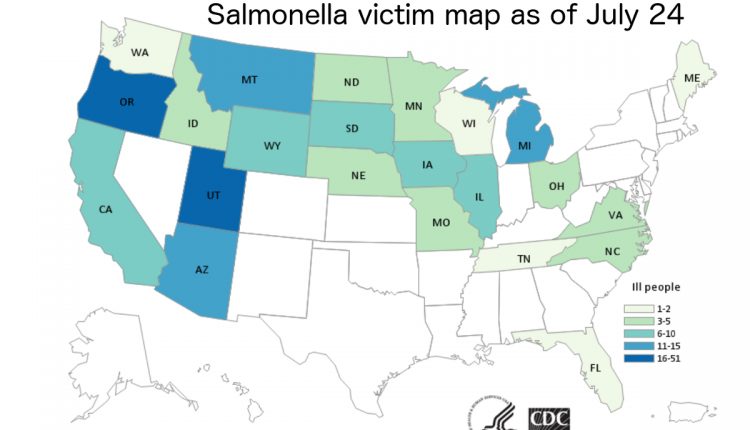 Federal health officials said this afternoon that a Salmonella outbreak of unknown origin is spreading rapidly, increasing to 23 states. Now there are  212 patients, which is up by 87 cases since the CDC’s outbreak announcement Tuesday.

“A specific food, grocery store, or restaurant chain has not been identified as the source of this outbreak,” the Centers for Disease Control and Prevention stressed in its outbreak update.” This investigation is active and evolving.”

Health officials are pleading with the public to help with the outbreak investigation.

“CDC encourages people experiencing symptoms of a Salmonella infection to report their illness to their local health department and participate in interviews when the health department calls to ask them about the foods they ate before they got sick. This information is vital for public health officials to identify the source of this outbreak and to take steps to prevent additional illnesses.”

The first person identified as part of the outbreak became ill on June 19. The most recent person got sick on July 11. It can take up to four weeks for the CDC to add patients to its tally following an initial positive test.

In the ongoing outbreak patients range in age from zero to 92 years old, according to the CDC. Of 117 patients for whom the CDC has received information on hospital status, 31 out of 117 people had been admitted. No deaths have been reported.

The CDC is encouraging people with specific questions to contact their state health departments. The agency reported that past outbreaks of Salmonella Newport infections have been linked to produce, meat, and dairy products.

Sick people should see a doctor because special tests are necessary to diagnose salmonellosis. Salmonella infection symptoms can mimic other illnesses, frequently leading to misdiagnosis.