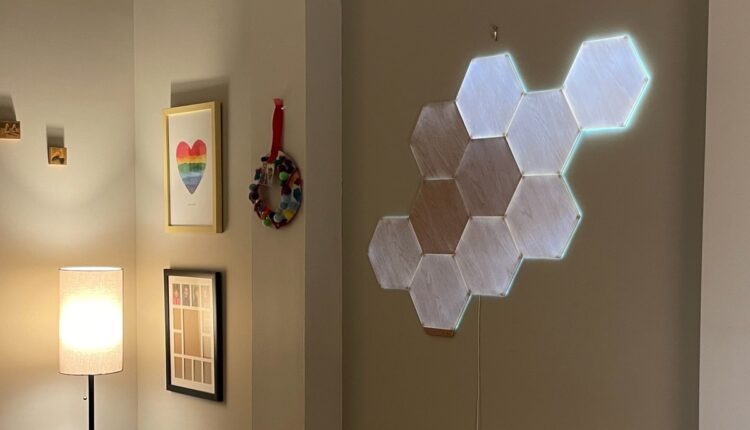 Nanoleaf Elements review: These handsome light panels look great powered on or off

Nanoleaf’s smart light panels have been delivering eye-catching light shows for years, but the panels themselves look a tad, well, ugly when they’re powered off. Not so with Nanoleaf’s new Elements line, which boasts a “wood-look” veneer that looks homey even when the hexagonal-shaped panels aren’t glowing. Besides the new design, the backlit Elements panels come equipped with corners that light up independently, and they support touch-enabled gestures for playing games, adjusting lighting scenes, and even controlling other HomeKit-compatible smart devices. Even better, the Elements controller will soon double as a Thread border router once an expected firmware update arrives.

All in all, Nanoleaf’s Elements panels make for a great addition to a living or dining room, whether they’re pulsing with animated light shows or turned off. That said, the usually easy Nanoleaf installation process is complicated by the fact that any gaps between the panels are plainly obvious when there’s no light show, and you’ll need to deal with the dangling power cord and a snap-on controller that doesn’t light up. And unlike Nanoleaf’s compatible Shapes line, the Elements panels glow only in white light, not color.

This review is part of TechHive’s coverage of the best smart lighting, where you’ll find reviews of the competition’s offerings, plus a buyer’s guide to the features you should consider when shopping for this type of product.

Finally, there’s the price: a hefty $300 for the seven-piece Elements “Smarter Kit” (which includes the panels, the controller, and the power supply), a $100 premium over the similar Shapes line. Ouch. A three-panel expansion pack (which lacks the controller and PSU) costs $99, same as it does for Shapes. So while the Elements panels are undeniably gorgeous, you’ll need to warm up your wallet before feasting your eyes on them.

Measuring 9 inches across and 7.75 inches wide (with each of its six sides measuring 4.5 inches), the 0.24 inch-thick Nanoleaf Elements panels are precisely the same size as Nanoleaf’s earlier Hexagons panels (one of three panel shapes in Nanoleaf’s Shapes line, along with Triangles and Mini Triangles). The Elements and Shapes panels are all compatible with each other, although actually mixing and matching the “wood-look” Elements with the color-capable Hexagons or Triangles would result in a visual mish-mash. During Nanoleaf’s reveal event, CEO Gimmy Chu admitted that users would probably be better off keeping Elements and Shapes panels separate, and I tend to agree.

While the Elements panels are made of plastic rather than wood, they have a wood-like veneer with a tactile grain pattern, and just as advertised, the grain patterns on each light panel are unique. The wood grain look is handsome and appealing, whether the panels are lit up or not, although you will need to approach the installation process with care to get the best results (I’ll discuss that more in a minute).

The panels themselves are rated at up to 22 lumens each, or a total of 154 lumens for the seven-panel Smarter Kit. That’s considerably dimmer than the 100 lumens you’ll get for each panel in the Nanoleaf Shapes series, although let’s face it; these light panels are primarily decorative rather than utilitarian. Installed in my dining room, the Elements panels looked perfectly bright to me, although the room is also lit up by a pair of 800-lumen smart bulbs screwed into floor lamps.

The Elements panels are the first from Nanoleaf that only glow in white light rather than color. The panels can light up in white color temperatures ranging from a very warm 1,500 Kelvin to a cooler 4,000K, good for mimicking anything from crackling embers in a fireplace to billowing daylight clouds. It’s easy to see why Nanoleaf skipped color for its Elements panels; after all, a wood-like panel glowing with red light would look pretty strange.

Another key difference between the Elements and Shapes line is that the corners of Elements panels can light up independently, which allows for some nifty, shimmering patterns. Also, the backlit panels emit a pleasing, coordinated glow on the wall behind them. That said, the very tips of the panels aren’t lit, which can be a bit distracting (at least initially).

Before you begin the relatively easy installation process, you’ll need to decide how to arrange your panels on the wall, which can be a stumbling block if (like me) you’re creatively challenged. (My first Nanoleaf installation turned out to be a big, boring “X.”) Luckily, the Layout Assistant on the Nanoleaf app does a great job of letting you experiment with different panel arrangements, which you can preview on your wall using the magic of AR.

Once you’ve settled on a layout, you’ll need to carefully clean the section of the wall where you’ll be installing the panels; if you don’t, you may end up paying the price later when your panels start coming unglued. Next, you affix a snap-on mounting plate to the wall using peel-and-stick adhesive tape, snap a panel onto the plate, and press firmly on the panel for thirty seconds to ensure a secure fit. (Another option is to screw the panels to the wall using the screw holes on the mounting plate.) You then repeat the process for the other panels, attaching links to connect the panels as you go.

While the process of installing the Elements panels is almost as easy as it is for Nanoleaf’s Shapes line, there are a couple of twists you’ll need to keep in mind. First, you’ll want to be aware of the direction of the faux wood grain; to avoid a haphazard zigzag look, I tried to keep the grain patterns going in the same direction. Of course, there’s nothing stopping you from going for a zigzag grain arrangement, but ideally you’d do it deliberately rather than by accident.

Secondly, you should be extra careful to avoid irregular gaps between the Elements panels; there’s one gap between a couple of panels in my installation that’s a bit of an eyesore, although you can only really see it when the panels are switched off. Now, gaps can also be an issue for Nanoleaf’s Shapes series, but because I usually keep Shapes panels lit during the day (they look a little ugly when they’re off), the gaps are harder to spot. You can fix any gaps by reinstalling the appropriate panels, but doing so is a hassle.

I’ve installed a few other Nanoleaf panel sets over the past 12 months, and so far none of them have come loose, although a couple became wiggly over time—likely because I wasn’t as diligent as I should have been about cleaning the wall first. It’s also worth noting that you can remove the adhesive tape from the wall by pulling it down from behind the mounting plate without leaving a mark.

Once you’re all done with the panels themselves, you’ll need to install a couple more components: a thin, snap-on controller with touch-sensitive buttons, and the power cord. The controller snaps on using one of the links that connects the panels together, while the power cord (which terminates in a chunky wall wart) has its own captive snap-on connector.

Also, there’s the dangling power cord, which can look unsightly unless it’s pulled taught or—ideally—snaked inside the wall. The Shapes panels have the same power cord, but I never gave it much thought because my two Shapes installations are in the cable-rich environment of my office. In my cozier dining room, the power cord issue became a bit more pressing. Since threading the cord through the wall isn’t an option for me (I live in an apartment), I used a wall staple to keep the cable pulled tight as possible.

Once the physical installation is complete, it’s time to connect the Elements to your Wi-Fi network using either the sleek, easy-to-use Nanoleaf app or the Apple Home app. I tapped the “Start Pairing” option in the Nanoleaf iOS app, scanned the QR code on the power supply, and within seconds the panels popped up in the app.

The Elements panels have the same basic lighting features as Nanoleaf’s Shapes line (read my review of Nanoleaf’s Hexagons for more details), including grouping, a circadian rhythm mode (which tunes the white color temperature according to the time of day), and a wide variety of animated lighting scenes.

Because the Elements panels don’t shine with colors, existing color-enabled scenes in the Nanoleaf app have been “remixed” for white color temperatures, while new monochromatic light scenes, including “Calming Waterfall,” “Clouds,” “Ember,” “Fireflies,” and “Sahara Night” have been specifically designed for Elements. Personally, I loved the cool “Clouds” scene for daylight hours, while the warm “Ember” scene was perfect for dinnertime and “Sahara Night” made for a great nightlight. There are also scenes that sync with music, aided by an embedded microphone in the Elements controller.

Besides standard light scenes, the Elements panels (along with the Shapes line) support interactive, touch-enabled scenes and games, such as “Touch Pain, “Whack a Mole,” and “Simon.” You can also program touch gestures that let you turn the panels on and off, adjust their brightness, or change lighting scenes. Even better, you can configure “touch actions” for controlling other HomeKit-enabled smart products, while a screen-mirroring feature lets you sync the panels to the images on your Mac or PC screen (a feature that requires the desktop Nanoleaf app).

As with the Shapes line, the Elements panels work seamlessly with HomeKit, and they support Alexa, Google Assistant, IFTTT, SmartThings, Homey, and Flic. Excitingly, Elements and Shapes controllers are also slated to become Thread border routers following a firmware update (which was promised for June but is still pending). Once updated, the controllers will be able to connect Thread-enabled devices to the internet, just as Apple’s HomePod mini can, although the panels themselves will depend on Wi-Fi connectivity rather than Thread. Click here for more details on how Thread will work on Nanoleaf’s Elements and Shapes panels.

With its handsome new Elements line, Nanoleaf’s snazzy light panels are creeping out of the home office and into the living room, and once you get used to them, you won’t want them to go. Compatible with HomeKit, Alexa, and Google Assistant, the Elements panels will fit nicely into most smart homes, and their warm, inviting lighting scenes can deftly set the mood, whether you’re serving dinner or snuggling in bed. But at $300 for the seven-piece “Smarter Kit,” the Nanoleaf Elements line is even pricier than the equivalent—and already expensive—Shapes starter pack, so if you want the wood-like Elements panels on your wall, you’d better start saving your pennies.