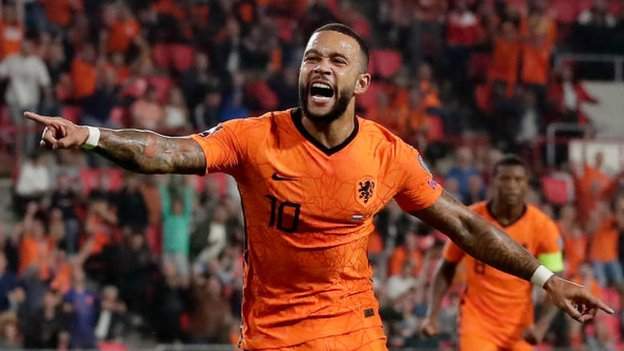 The Barcelona forward scored from the penalty spot after he had been hauled down in the box by Dusan Lagator.

He struck his second after the break, lashing in from an angle before Giorginio Wijnaldum struck the third.

Cody Gakpo then curled in the best goal of the night as the Dutch moved second in Group G, a point behind leaders Turkey, who they host on Tuesday.

Follow live text commentary of Netherlands v MontenegroGakpo’s goal was his first for his country and scored on the ground he plays his club football for PSV Eindhoven on.

Depay now has 30 for his country and nine in his last nine matches.

Along with Wijnaldum’s effort they ensured a thoroughly deserved win – the first of boss Louis van Gaal’s third spell in charge of his country.

Montenegro did have their chances, mainly as a result of sloppy defending from the home side, but Stefan Mugosa was especially wasteful, notably with a shot he sliced wide having been put in on goal by Dutch debutant Tyrell Malacia’s sloppy pass.

They are fourth in the group now on seven points and off the pace for the one automatic spot, with Tuesday’s game in Amsterdam between the top two likely to go a long way to deciding who takes that.

Milos Raickovic (Montenegro) wins a free kick in the defensive half.

Attempt blocked. Guus Til (Netherlands) right footed shot from the left side of the box is blocked. Assisted by Tyrell Malacia.

Marko Simic (Montenegro) wins a free kick in the defensive half.

Steven Bergwijn (Netherlands) is shown the yellow card for a bad foul.

Attempt missed. Matthijs de Ligt (Netherlands) header from the centre of the box misses to the left. Assisted by Steven Berghuis with a cross following a corner.

Attempt blocked. Frenkie de Jong (Netherlands) right footed shot from the left side of the box is blocked. Assisted by Steven Bergwijn.

Marko Vukcevic (Montenegro) is shown the yellow card for a bad foul.