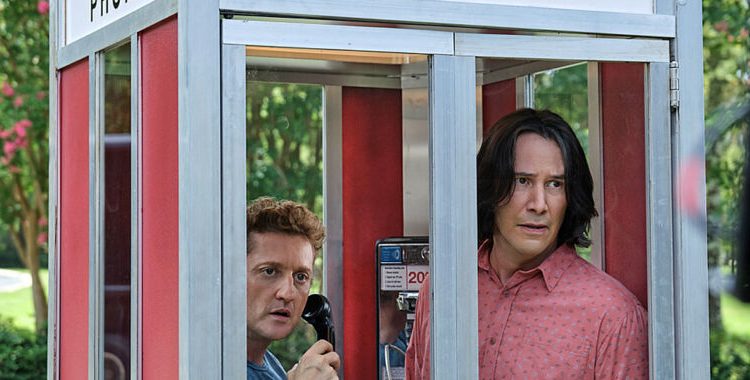 As a person over the age of 30, I, too, have a soft spot for 1980s cinema: Indiana Jones, Ferris Bueller, an infinite number of high school movies. But 40 years later for some of these films, rose-colored glasses can quickly shatter whenever you start a rewatch. Indy runs around snatching up artifacts that should probably be in the hands of local leaders, no? Ferris Bueller treats his girlfriend and best friend like trash. And, good lord, things like Revenge of the Nerds wouldn’t be greenlit in 100 years if pitched this century.

All of that—plus Indiana Jones and the Kingdom of the Crystal Skull—made “caution” the correct reaction when the long-rumored “Bill & Ted 3” finally transitioned to reality in March 2019.

Kind of a buddy comedy, high school slacker movie, and time travel adventure all wrapped into one absurd package, the original Excellent Adventure remains something I adore. (Ate the cereal to get the phone booth; had the Genghis Kahn action figure.) And rewatching it recently, that film refreshingly holds up better than your average ’80s flick. Outside of some ill-chosen words in medieval times (which frankly seems out of character for Theodore Logan and Bill Preston Esq. even considering the film’s release year), Bill and Ted unironically love each other, they treat folks from other cultures with respect (as best they know how to, at least), and they never pretend to be anything close to tough or cool. Even some of the subtle messaging holds up: People in authority—from a cop dad to a sundae-loving Napoleon—can be jerks. Music or the arts can be a great unifier. Even those with pre-destined, Earth-saving greatness can use a little practice from time to time.

So maybe it shouldn’t be a surprise that Bill and Ted Face the Music—the series’ latest film simultaneously released this weekend in theaters and via VOD (~$20 to rent on most platforms)—so seamlessly shifts our most excellent heroes into modern times. If you’re not aware that strange things can be afoot at the Circle K, you’ll want to watch the originals first (both to enjoy some references/in-jokes and to have a basic grasp of what’s happening). But if you also already have a soft spot for the Wyld Stallyns, hop in your nearest phone booth, dial up the infinite, and prepare for another charming, over-the-top and surprisingly poignant ride through time.

Face the Music takes place 25 years after the events of Bogus Journey, and Bill (Alex Winter) and Ted (Keanu Reeves) have stuck with their history-shaping music careers. Only, it hasn’t quite gone as the prophecy hinted. “What have you got to say for yourself?” The Great Leader (Holland Taylor) says at one point while trying to remind our heroes of their goals here (writing a song that will unite humanity and all). “One month ago, you played an Elks Lodge in California to 40 people, who were mostly there for $2 taco night, whatever that means.” When we first see the duo—performing at a very familial wedding—they appear to be into an experimental noise rock phase. Theremin. Throat singing. The works.

Unfortunately, Bill and Ted seem to have kind of wasted their potential primes just aimlessly enjoying each other’s company and rhythm guitar work. Their marriages to the princesses need couples therapy. Chief Logan (Hal Landon Jr. returns!) thinks of these boy-men as even more deadbeats now, as they have tall tales of time traveling to accompany non-existent careers and ambitions. Life has gotten depressing enough that Ted considers finally selling his signature Les Paul.

But not everyone has lost the faith. Locally, the dudes have become dads, and their daughters Billie Logan (Brigette Lundy-Paine, Netflix’s Atypical) and Thea Esquire (Samara Weaving, SMILF) still see the two aging rockers as most excellent. The girls also share their fathers’ passion for music, but they’ve already surpassed their parents when it comes to encyclopedic knowledge of it. Billie and Thea can find the bass intro- or solo section-sized bright spots in even the roughest Stallyns tracks.

The future hasn’t quite abandoned these sonic saviors, either. The Great Leader thinks time has all but run out for Bill and Ted to write the song, so maybe only sending a robot to murder them will save how warped history and reality have become. But Rufus’ daughter Kelly (Kristen Schaal, Bob’s Burgers) thinks all the duo needs is one last chance to hop in the phone booth to right the ship. When she charters an interdimensional pod for San Dimas to let Bill and Ted know time has started to run out, the race is on to finally deliver a savior single—or die trying.

Saying anything more about the story might spoil the fun, and Face the Music exists to deliver fun. Face the Music has a bit less of the extended historic time and place adventures than Excellent Adventure and a bit less of the hell hijinks than Bogus Journey, but both of those ideas factor into this new installment. If your favorite part of the originals involved Bill and Ted interacting with other themes via time travel, on the other hand, that bit gets turned up to 11 (to mix music movie metaphors). Reeves and Winter demonstrate repeatedly they haven’t lost their comedy chops after all the years and many divergent Hollywood gigs, and some of these sequences stand among the film’s funniest (silliest) moments.

All of the new cast additions feel natural in the Bill & Ted universe, but in particular Lundy-Paine and Weaver really do Billie and Thea justice. Their characters are younger, more capable female clones of their dads, and these actors nail the intonation and demeanor of young Winter and Reeves. My mind swears it heard 1989 Keanu Reeves saying “dads!” repeatedly. (Kid Cudi as “Kid Cudi, but into quantum entanglement” ranks a close second in terms of favorite new additions.)

Most charming of all, this entry into the now-trilogy continues the ethos of those old films. Instead of Bill and Ted loving each other unironically (still a thing, even if it jeopardizes their marriage), Face the Music extends that unabashed care to father-daughter relationships, too. The “be excellent to each other” mantra has clearly been passed down a generation based on how Billie and Thea interact with the various past and present figures they encounter. And in the end, no one from Bill and Ted and Billie and Thea to Death or a Death-delivering robot ever pretends to be anything they’re not. In this excellent expanded universe, you can always come as you are (even if you prefer 1980s glam rock to early ’90s grunge).

Face the Music even manages to sneak in a few extremely 2020 sentiments (though the script came about long before our COVID-19 existence did). Bill and Ted speak to the steady march of modern labor where hours increase but real wages don’t (Bill believes saving their marriages requires them to stick with the band that’s put a strain on everything: “That’s why we have to keep working,” he says. “Isn’t that the problem?” Ted replies. “Yes, but it’s also the solution”). Kelly reflects generational divide angst as the world grapples with problems sowed decades ago, from climate change to systemic racism (“I’m trying to save the world mother, it’s not like your generation has done that great”).

But ultimately, the most encouraging message Face the Music offers is the 10,000-foot view of our two heroes. Face the Music is initially a story of unfulfilled promise: two dudes believed they could do big things and set about trying to make it happen, but only life happened. Suddenly it’s years later, no grandiose goals have been achieved, and things seem to be in stasis. If less admirable characters were in the frame, that’s the kind of starting point that could lead to an overly dark DC superhero flick. But with Bill and Ted, even journeys through hell reinforce hope. It’s never too late to change the world (or the trajectory of your all-of-humanity-impacting life), especially if you believe in empowering the next generation and the everlasting appeal of 1980s operatic rock. Party on, dudes (and in the real world, let’s hope live music can eventually safely return to continue unifying small groups of humanity, Wyld Stallyns style).

DC shows off trailers for The Batman, Wonder Woman, the Snyder cut, and more

Want Verizon or AT&T 5G? You’ll have to buy an…