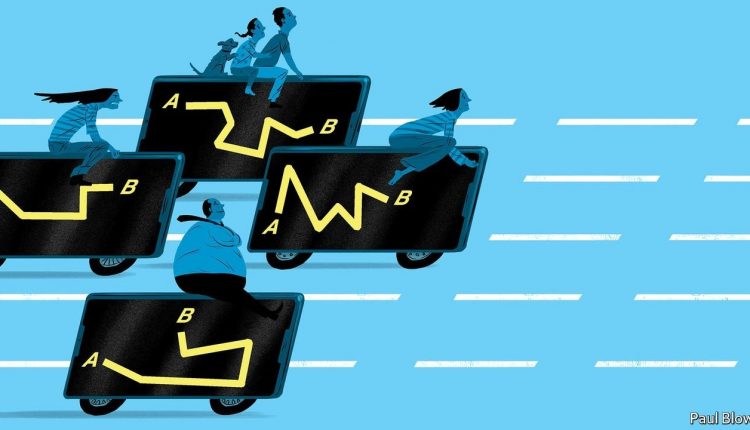 New means of getting from A to B are disrupting carmaking

IN THE DECADES after the second world war carmakers were the undisputed champions of the personal-transport economy. Competition and economies of scale made cars affordable to millions of motorists in industrialised countries. In the 1980s and 1990s the likes of General Motors (GM) and Toyota boasted some of the world’s richest market capitalisations. When it came to getting around town, nothing beat the automobile.

Today the picture looks different. Of the five most valuable firms in the moving-people-around business only two, Toyota of Japan and Volkswagen of Germany, are established carmakers. Ahead of everyone by a country mile is Tesla, an American company that has disrupted the car industry by turning electric vehicles from an unsightly curiosity (remember the G-wiz?) into a serious challenger to the internal combustion engine. Rounding off the top five are not carmakers at all but Uber, an American ride-hailing giant worth over $100bn, and Didi Chuxing, a Chinese one that on April 10th was reported to have filed confidentially to go public in New York and hopes for a similar valuation.

After being slow to react to the threat from Tesla, legacy carmakers are—just about—getting to grips with electrification. Now another disruption lurks around the corner. Changing habits and technology are forcing car companies to rethink how their products are sold, used and owned. In a sign of the times, the boss of Volkswagen, Herbert Diess, concedes that “ownership is not necessarily what you want. You want a car when you need a car.” Competitors are elbowing in; Didi is expected to be the star turn at the Shanghai Motor Show later this month. The private car is not obsolete. But the future business of “mobility”—as the industry has rebranded getting from A to B—will involve much more besides.

The market could be enormous. In 2019, ahead of its flotation, Uber put it at $5.7trn, based on the 20trn or so kilometres that passengers travel each year in 175 countries using road vehicles, including public transport. Consultancies’ estimates are more subdued, and vary considerably. But all point to rich potential. IHS Markit reckons that what it calls “new transport” will be worth $400bn in revenues by 2030. KPMG puts the figure at $1trn. Accenture calculates that revenues from mobility, including car sales, will hit $6.6trn by 2050; new transport will make up 40% of the total.

Individually owned cars will remain a big part of the new ecosystem. They are still the world’s preferred means of transport. For every ten miles travelled Americans use the car for eight, Europeans for seven and Chinese for six. Even in Europe, which is friendlier to public transport than America or China, only one in six miles was travelled on buses, trains and coaches in 2017. Uber accounts for just 1.5% of total miles driven in its home market.

The pandemic has in some ways cemented the car’s pole position. Many people have shunned shared vehicles, be they cabs or buses, for fear of infection. A survey of American travel habits by LEK, a consultancy, showed that car journeys declined by just 9% last year, compared with 55-65% for public transport and ride-hailing. Although today’s teenagers are less interested in getting behind the wheel than their parents were, that changes when they turn 20. Between 2010 and 2018 America lost 800,000 drivers under 19 but gained 1.8m aged 20-29, estimates Bernstein, a broker. Zeal for cars in China, the biggest market, remains strong. In the first three months of the year Chinese car sales rebounded close to their pre-pandemic peak.

The automobile’s appeal endures on the outskirts of cities and beyond. Most driving takes place away from congested urban cores, Bernstein reckons. Nearly 90% of car miles in America are driven in the suburbs, small towns and rural locations, where a private car is often the only choice.

Instead it is in the city centres where a revolution beckons. There the classic ownership model is endangered, new modes of transport are emerging and competition is building from upstart mobility providers that connect customers with a mesh of different services.

Didi, Uber and others enable rides on demand. Having lost money for years, Uber and Lyft, its smaller American rival, should become profitable in 2022, thinks Morgan Stanley, an investment bank. On April 12th Uber reported record monthly gross bookings (including food delivery). Companies like Zipcar let people rent cars by the hour, or even minute. Turo, a Californian firm, is one of several to offer longer-term peer-to-peer car-sharing. BlaBlaCar, a French one that has signed up 90m drivers in 22 countries, connects those with spare seats to travellers headed in the same direction. Bike-sharing schemes jostle in new dedicated lanes with electric scooters for hire. Before the pandemic consultants at McKinsey reckoned that renting e-scooters might generate revenues of $500bn worldwide by 2030. Even flying taxis may at last be about to take off; some of their developers, such as Joby, have earned multibillion-dollar valuations.

These various modes of transport are being stitched together into seamless trips by specialist journey-planning apps. They let travellers take a scooter to the underground station, take the metro, then jump in an Uber for the last mile—or pick whatever other combination of price and travel time is most suitable. They charge the individual service providers a commission for including them in a journey. Some are experimenting with subscription plans.

Some makers of aggregator apps are startups. Whim of Finland gives access to public transport, taxis, bikes and cars for a single subscription in several European locations. Others are stalwarts of the transport business. Deutsche Bahn, Germany’s state-owned railway company, has an app that also lets passengers use a variety of travel options. Frost & Sullivan, a consultancy, forecasts that such aggregators will generate revenues of $35bn with a decade.

Small wonder carmakers want in. Many have done so by investing in the newcomers. In 2016 GM ploughed $500m into Lyft and Volkswagen put $300m in Gett, a European taxi-hailing app. Toyota has invested in Uber, Didi and Grab, a Singaporean ride-hailing company that is going public in a reverse merger valuing it at $40bn (see Schumpeter). GM has since sold its stake (at a healthy profit) but Toyota and Volkswagen have held on to theirs.

The car firms have also been competing with the challengers head on. It helps that many are already familiar with the principle of charging for use rather than ownership. In Britain more than 90% of cars use some form of financing. Arrangements where the customer pays a monthly sum over two to four years to offset depreciation are a lot like a long-term rental. It is not a huge leap from that to a subscription service. Hakan Samuelsson, boss of Volvo, thinks the shift from ownership to “usership” could be rapid.

Five years ago, in a bid to convince investors it was a “mobility” firm, not an irrelevant behemoth, GM launched Maven, a brand offering car-sharing and a peer-to-peer rental. The same year Ford, GM’s Detroit rival, acquired Chariot, a shared minibus service, and Volkswagen launched MOIA, which employs 1,300 people developing on-demand transport. In 2019 BMW and Daimler, two German makers of luxury cars, combined their mobility businesses into a joint venture called Free Now, and Toyota launched its car-sharing and travel-planning platform, Kinto, which has since expanded to several European countries.

Some upmarket carmakers, including Volvo (a Swedish brand owned by Geely of China), Audi (part of Volkswagen) and Lexus (Toyota’s premium brand), have tried to woo back younger city-dwellers with subscription services. For a monthly fee starting at between $600 (for a Volvo) and $1,000 (for an Audi or a Lexus), which excludes only fuel, users get access to a vehicle whenever they need one. Lynk & Co charges users €500 ($595) a month for its cars. Its boss, Allan Visser, calls his marque (also owned by Geely) the “Netflix of cars”.

As the relationship between car brands and customers gets more continuous, replacing some one-off sales, it is also becoming more direct. Tesla pioneered selling cars in its own salons, as Apple does with its gadgets. Other carmakers are beginning to follow suit. Lynk & Co sells its cars online. Volvo said in February that it would start doing the same. The trend has been accelerated by the pandemic, which has pushed car buyers away from dealers’ forecourts and onto the internet. Selling vehicles directly forges a bond with individual customers that may help car firms flog them other services in the future.

Not all mobility ventures will succeed. Some have already fallen by the wayside. Ford pulled the plug on Chariot in 2019. Maven was put to rest a year later. A few months ago Free Now quietly wrote off its Hive e-scooter business and in March sold ParkNow, an app that allows drivers to find and pay for a parking space. As Ashish Khanna of LEK observes, ride-hailing will always struggle in outer suburbs where passengers are far less thick on the ground. Assaf Biderman, boss of Superpedestrian, which operates shared e-scooters, notes that city peripheries in particular are still “built for cars”.

Nevertheless, carmakers are not taking anything for granted as they face up to the reality that a few decades from now they may be selling fewer cars in the time-honoured way. If Tesla taught them anything it is that being caught asleep at the wheel can be awfully costly. ■

A version of this article was published online on April 11th, 2021.

The method in Microsoft’s merger madness