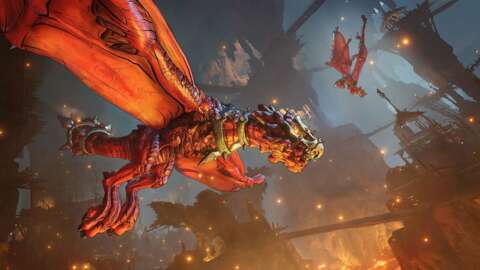 Last week’s Summer Game Fest kick-off show revealed Tiny Tina’s Wonderlands, a Borderlands spin-off that swaps the usual sci-fi themes of that universe for a more fantasy-influenced experience. The first trailer for Wonderlands wasted no time in confirming that Tiny Tina is embarking on a fantasy-fueled adventure, and over on Twitter, Gearbox CEO and Lord of the Rings fan Randy Pitchford has posted a few more screenshots of the game.

They’re exactly what you expect from a series that has ventured into the fantasy realm before, with Pitchford teasing spooky dungeons, dragons, and skeleton warriors. The overall aesthetic is in line with Borderlands 3, which got a next-gen upgrade on PlayStation 5 and Xbox Series X|S when those consoles launched.

If you like what you’re seeing above and you wish that you could bring Wonderlands into your home, the good news is the game will be supported by a range of consumer products, as Gearbox and 2K Games have inked a deal with Retail Monster to “lead the global retailer and consumer products strategy” around the game.

Coming next year on PC, PS4, PS5, Xbox One, and Xbox Series X|S, Tiny Tina’s Wonderlands will arrive with an all-star cast of voice actors that includes Ashly Burch as Tina, Andy Samberg as Valentine, Wanda Sykes as the robot Frette, and Will Arnett as Dragon Lord.

Battlefield 2042 Livestream Coming Today, Here’s How To Watch And What To Expect