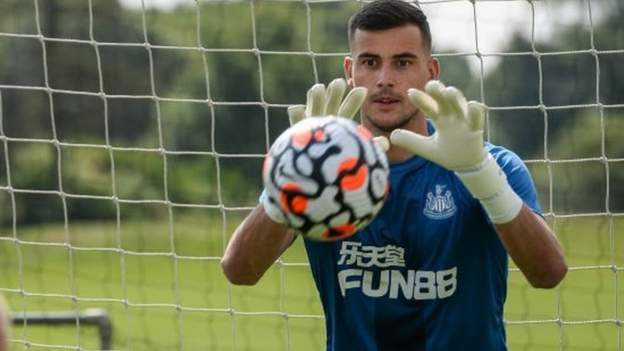 Newcastle United goalkeeper Karl Darlow talks to The Sports Desk podcast about his experience with Covid-19Newcastle United’s Karl Darlow has urged footballers to “go and get the jab” after he recovered from a serious bout of Covid-19.

The goalkeeper spent three days on a hospital drip and was “severely worried” after catching the virus before he was due to have his first vaccine in July.

Having only just returned to full fitness after “awful fatigue” and losing five kilos, Darlow told the BBC his ordeal had convinced “a couple” of his team-mates to get immunised.

But speaking on The Sports Desk podcast, Darlow added that “four or five” other Newcastle players remain unvaccinated “for hopefully genuine reasons”.

Darlow’s warning comes as the Premier League prepares to send a video to clubsexternal-link next week in which the government’s deputy chief medical officer Professor Jonathan Van-Tam urges players to ignore myths and misinformation about the vaccine.

There is growing concern about the numbers refusing get inoculated, with almost a third in the English Football League still not immunised.

Listen: Karl Darlow on The Sports Desk podcastEverything you need to know about Newcastle United, all in one placeWhy is Man Utd v Newcastle not on UK TV?’My family was panicking’Darlow, 30, believes he caught the virus after attending the Euro 2020 final at Wembley, just four days before he was due to have his first vaccination.

A few days after testing positive his conditions worsened.

“I ended up driving myself into hospital about 11 or 12 o’clock at night, just so I could get hydrated, because I wasn’t able to swallow with my glands so swollen,” he said.

“I was severely worried. When it was at it’s worst…I didn’t want it to affect my breathing. I knew that if I could get in and get on a drip and get the food and water into myself, I’d be OK but there’s always a thing, in the back of your mind, that if it does get into your breathing, then you are in serious trouble.

“It was probably two or three weeks, even after I’d been diagnosed, that I was still going home sleeping in the afternoon for two, three hours and then after probably 9-10 hours at night.

“I had nearly every single symptom, I think. The hot and cold, diarrhoea, everything, it wasn’t nice. Weight wise, I wasn’t able to eat or drink for three or four days, so I ended up losing about five kilos. I don’t think Lucy, my partner, could believe just how gaunt I was in the face and how much weight I had lost.”

Darlow says he now regrets not organising a jab earlier, and revealed his experience had helped to convince “a couple” of his team-mates at St James’ Park to get vaccinated.

“I think seeing how I was probably convinced them to go and get get it done. So it’s tough, because everyone who isn’t having it has their own reason, and sometimes it’s hard to convince or go into deep conversation with your team-mates about getting vaccinated if they have a very good reason, and you can’t force it upon people.

Darlow said his message to unvaccinated footballers who may think they are too young and healthy to worry about Covid is “go and get the jab”.

“I just thought it wouldn’t have that massive effect on me if I did catch it,” he said.

“I think there are a lot of people that are thinking that way [but] there are numerous cases now that are younger people and unfortunately, people are not recovering and others are taking a substantial amount of time to come back.

“You don’t want to go through it and risk your health.”

‘Four or five players have not had jab’Although most clubs have been reluctant to reveal the vaccination status of their squads, Newcastle United boss Steve Bruce is among several football managers to admit some of their players have declined to take the vaccine. To encourage uptake, Professor Van-Tam has already met Premier League captains to dispel myths around immunisation.

Athletes in a range of sports have expressed concerns that the side-effects of vaccination could affect their performance, but Darlow said that was not a concern he heard from team-mates.

“I don’t think that is the reason here why we’ve still got four or five lads that haven’t had [the jab]. It will be for hopefully genuine reasons.

“What we’ve got here is people have their own reasons for either health issues, or religious reasons, and different things,” he said.

The pressure on players to be immunised could increase if the government presses on with plans to make vaccine passports mandatory for fans attending sports events in England with crowds of more than 20,000 people.

The Scottish government will bring in such a policy from 1 October. Travel for fixtures abroad could also become harder for athletes who are not vaccinated, especially if cases rise this winter.

Everything you need to know about Newcastle United, all in one place

Does your laptop feel sluggish? Try these 9 things before you give up