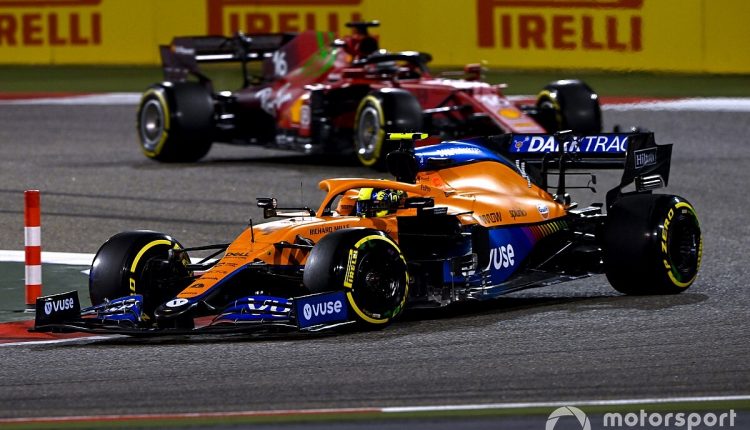 Norris: McLaren “not miles away” from Mercedes and Red Bull

McLaren finished third in last year’s constructors’ championship and the Woking outfit is tipped to confirm its status as best of the rest behind Red Bull and Mercedes in 2021.

While McLaren drivers Daniel Ricciardo and Norris qualified sixth and seventh respectively in Bahrain, behind a Ferrari and an AlphaTauri, Norris worked his way up to fourth as the highest finisher not driving for one of the two top teams.

When asked by Motorsport.com if the 2021 season opener confirmed that McLaren is on top of the midfield battle, Norris said it’s “hard to say” if the team is best of the rest but was encouraged by the fact that McLaren is closer to Red Bull and Mercedes than last year.

“We’re close, we’re not miles away from Mercedes and Red Bull comparing to last season,” Norris answered. “I think we’ve closed the gap quite a bit and hopefully at some tracks close it even more.

“It’s hard to say if we’re easily best of the rest, I don’t know what the pace of the AlphaTauri was like, but I think the car is good.”

Norris qualified behind Ferrari’s Charles Leclerc, but after a two-lap tussle in the opening stages he managed to pass the Monegasque driver into Turn 1 and then comfortably drove away.

AlphaTauri’s race pace is more of an unknown due to fifth-starting Pierre Gasly hitting the back of Ricciardo on the opening lap, but his rookie teammate Yuki Tsunoda showed the Faenza team has potential on his drive from 13th to ninth.

Norris expects McLaren’s battle with Ferrari and AlphaTauri to “go backwards and forwards” all season but was confident McLaren’s race pace would be superior to Ferrari’s in Bahrain.

“Yeah, I think we kind of knew that from the runs in FP2 and the test we did here,” Norris explained. “I think we’ve got an understanding of what [Ferrari] can do.

“Even last year Charles was ahead of us in qualifying and the Ferrari can be very quick in qualifying. During the races they seemed to struggle. I think we were just clearly quicker on pace, which was a good thing, but there’s going to be some races probably where they can look after the tyres better and be much quicker.

“It’s going to go backwards and forwards between us and Ferrari and with AlphaTauri it seems pretty close between us, so I’m looking forward to the battle.”

Rossi unsure if MotoGP form will rebound in Europe

“Ted” Gets A Peacock Prequel Series