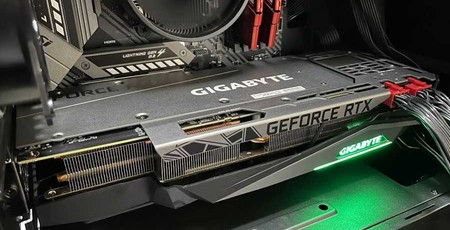 The Nvidia GeForce RTX 3080 Ti was launched back at Computex this summer. It was billed as the Nvidia’s ‘Gaming Flagship’ at the time, despite being a rung below the top-end consumer card – the RTX 3090. However, the GeForce RTX 3080 Ti’s memory quota of 12GB still seemed somewhat stingy, when much less powerful GPUs from Nvidia and other brands offering similar or larger buffers. People were left wondering what happened to the widely rumoured RTX 3080 Ti with 20GB VRAM…

Last month VideoCardz received some photographs of a purported Gigabyte Aorus GeForce RTX 3080 Ti Gaming OC with 20GB, but today we have two more pieces of the puzzle, which seem to almost confirm the upcoming launch of GeForce RTX 3080 Ti graphics cards with 20GB on board.

In the YouTube video testing of this 20GB card, we see that it was possible to coax nearly 100MH/s out of it. This indicates that these new graphics cards aren’t LHR variants, and are either being presented as an attractive option for miners to snap up, or come from some old stockpile somewhere from before the LHR days. It is hard to believe there has been unsold stock of RTX 308 0Ti 20GB graphics cards gathering dust, so I would rather believe that this is a new/pending product release.