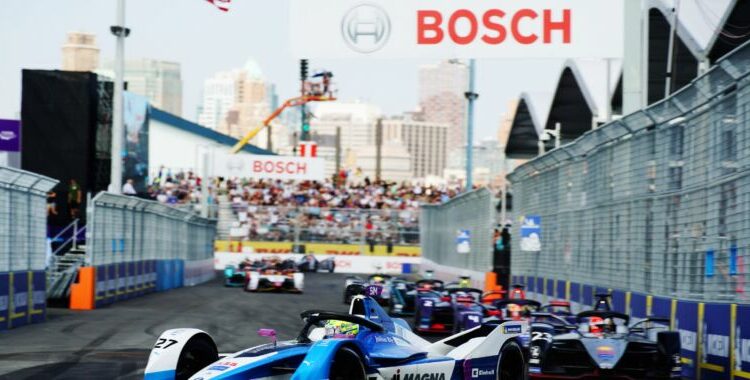 Formula E, the electric car racing series, is back in Brooklyn this coming weekend. It’s the series’ first time back in North America since 2019, having skipped last year for obvious reasons. COVID-19 caused most of season six to take place on the concrete of Templehof in Berlin, but season seven saw some return to normality when it began back in February, now with the FIA (which is in charge of global motorsport) blessing it as an official world championship. Ahead of the New York ePrix double-header, Ars checked in with some of the teams and drivers to see how one of our favorite racing series has continued to evolve.

Although Saturday’s race will be the 10th round of season seven, the pandemic has continued to make its presence felt this year. Covid cancelled planned races in Santiago, Chile, and Marrakech, Morocco, and kept spectators from attending rounds in Rome and Valencia, Spain. Their absence was noted, even if it has freed up the drivers’ time between on-track sessions.

“We’re there to entertain people, and not having people there to enjoy what we do has been quite disappointing,” said Jaguar Racing’s Sam Bird. “It’s nice to see fans getting excited, asking for autographs, people having smiles on their faces when they see their favorite drivers or their favorite cars, so yeah it’s been tough to not have fans there, and I can’t wait to have them back.”

His teammate, Mitch Evans, concurred. “It was quite shocking; when we went to Berlin was the first time we’ve experienced zero fans, just essential people,” Evans told me. “Honestly, you don’t realize how much just having a crowd of people actually brings the atmosphere up and brings a vibe to the event.”

An exciting race in Monaco, with actual overtaking?

The Monaco ePrix in May was the first to welcome back some crowds, and it also marked the first time that Formula E has been able to use the full track layout rather than the half-circuit that the series raced on for its first few visits to the city. (Well, almost; there were slight modifications to the St Devote and Nouvelle Chicane corners compared to the F1 version.) The electric racing cars certainly lived up to the occasion, putting on one of the most thrilling races to take place in the Principality for decades with plenty of actual overtaking, something that has long been virtually impossible for Formula 1.

“Formula E put on an amazing show. Mitch, in particular, to be honest, helped make that show,” said Bird, referring to Evans’ third place result. “These cars deserve to be on the full circuit and we proved that we can put on a good show. You know you’re always going to have the person that compares laptimes [between different series], but as long as we put on a good show that’s the main thing. The point is to do that, not compare [Formula E] to another category.”

Evans credits some of Formula E’s ability to race wheel-to-wheel in Monaco to the technical nature of racing a Formula E car, which requires a driver to be as efficient as possible without losing speed. The smaller size and lower power output help, too. The lower speeds mean aerodynamic downforce is also much less important. “Obviously, we rely a lot more on the mechanical grip, so when we’re following cars we’re not affected by any turbulence or dirty air where F1 cars or F2 do get affected by that a lot more,” Evans said.

The Monaco ePrix evidently impressed all the right people. Earlier this month the series and the FIA decided to make it an annual event rather than the previous biannual scheduling. The F1 weekend rightfully remains the jewel in that series’ crown, and it will still have more glamour and cachet. But how much of that is just down to the sheer size of the budgets in F1, even in the age of cost caps?

For the teams and manufacturers competing in Formula E, there’s always been a tension between wanting rules that foster a lot of technical development versus the need to keep budgets within the realm of reason.

“We noticed quite early on in our involvement in Formula E that if we weren’t careful, really because of the number of OEMs that are involved—and again we’re our own worst enemies—there was the potential for it to turn into a bit of an arms race,” explained Ian James, the Mercedes-EQ Formula E team principal. “That’s something which had to be avoided because the sustainability of the series from a financial perspective would have been adversely impacted.”

Consequently, we may well see a cost cap introduced in Formula E soon. “Those discussions are ongoing at the moment and the intention is that, really coming with Gen3 [the next evolution of the Formula E car, due for season eight] that we’ll see a cost cap praised from a competitive perspective and a manufacturer perspective. And I think that’s absolutely the right thing to do,” James said.

Each race series has to balance the competing demands of being a sport, being entertainment, and being a place to develop new technology in its own way. Uncontrolled technology development is obviously bad for an entrant’s pocketbook, but the OEMs and suppliers say they’re attracted to the series precisely because it’s a way to make better road-going EVs.

“It’s extremely well strategically aligned with our business and the transformation that we’re undertaking towards e-drive and the electrification opportunity in automotive. So as you can imagine, the sorts of technologies that are being furiously developed in Formula E are very relevant for that side of the business,” said Gordon Day, general manager of the GKN Automotive Innovation Center and a key technical partner of the Jaguar Racing team.

“The pursuit of electrical efficiency is highly relevant. For Formula E, they’re eeking out an energy advantage for the final corners, and efficiency is everything there. So there’s that pursuit of efficiency, down to integration of systems within the inverter, for example,” Day told me.

“The clever software algorithms to get more efficient motor control—just system integration as a topic and optimization, recognizing that with continuing generations of EVs for automotive, you’re almost visibly and invisibly seeing the closer integration of systems for performance benefits. We actually see similar components within the inverter, for example, between those used on the track and those being developed for road use as well,” Day said. However, as we’ve detailed in the past, the technical freedom in the series is limited, and both BMW and Audi cited that as the reason they are each ending their Formula E programs at the end of this season.

Formula E’s current racing car, known as the Gen2 car, was introduced for season five and will continue to be used until the end of next season before being replaced by the Gen3 design for season nine. Discussions are still ongoing between the series, the FIA, the teams, and other potential entrants to determine the exact nature of that car. Power is going to increase, and weight should drop, but the eventual technical regulations are still likely to leave some wanting more.

The flip side, as Mercedes’ James pointed out, is that car makers have shown in the past that when too many of them compete in the same series with too much technical freedom, spending quickly gets out of control.

“There are some good elements coming in [Gen3] which will differentiate it from Gen2 and keep the whole thing fresh, but at the same time, hopefully not driving in a direction that’s going to be financially unsustainable,” James told Ars. Companies like Mercedes want people to see some relevance between the single-seat race cars used in Formula E and the road-legal passenger EVs that are starting to proliferate. In practice that is happening more as the flow of information that occurs when the people developing the race cars work alongside their colleagues developing the road cars more than actual components that get race-tested before mass production.

A danger for Formula E going forward is to make sure the rules don’t constrain the cars to the point that they’re eclipsed by road-going EVs. And EV powertrains are already so efficient that there might not be much low-hanging fruit for Formula E to help pluck.

The FBI’s honeypot Pixel 4a gets detailed in new report

5 Ways Running Legend and Advocate Allyson Felix Balances It All