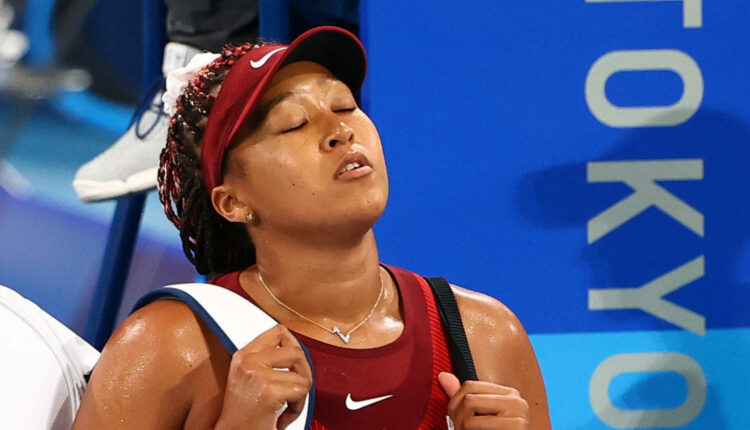 Olympics shocker: Osaka beaten and is out of Tokyo Games

It wasn’t the ending Naomi Osaka or her multitudes of fans across Japan and worldwide expected. But the Tokyo Olympics’ start will forever be a bright memory for the tennis superstar.

Osaka said after lighting the Olympic cauldron during last week’s opening ceremony that it was “undoubtedly the greatest athletic achievement and honor I will ever have in my life.”

Undoubtedly the greatest athletic achievement and honor I will ever have in my life. I have no words to describe the feelings I have right now but I do know I am currently filled with gratefulness and thankfulness ❤️ love you guys thank you. pic.twitter.com/CacWQ5ToUD

So maybe – just maybe – that will enable Osaka to cope with her unexpected 6-1, 6-4 loss to former French Open finalist Marketa Vondrousova of the Czech Republic in the third round of the Olympic tennis tournament on Tuesday.

“I’m disappointed in every loss, but I feel like this one s–ks more than the others,” Osaka said.

As a four-time Grand Slam champion, the highest-paid female athlete in the world and the host country’s poster girl for the Games, the huge expectations were hard to handle.

“I definitely feel like there was a lot of pressure for this,” Osaka said. “I think it’s maybe because I haven’t played in the Olympics before and for the first year (it) was a bit much.”

Still, on the day before her loss, Osaka tweeted she was “here for a good time”:

The second-ranked Osaka, who was born in Japan and grew up in the United States, struggled with her usually reliable groundstrokes while the left-handed Vondrousova produced a series of drop-shot winners and other crafty shots that drew her opponent out of her comfort zone.

Naomi Osaka of Japan walks off after losing her third round match against Marketa Vondrousova of Czech Republic at the Tokyo Olympics on July 27, 2021.

“It’s tough for her also playing in Japan and in the Olympics,” the 42nd-ranked Vondrousova said. “It’s so much pressure, I cannot imagine.”

Osaka won her opening two matches in straight sets following a two-month mental health break. But conditions were different Tuesday with the roof closed because it was raining outside.

Osaka had talked earlier this week about how “happy” she was to be playing again. That came after she announced in May going into the French Open that she wouldn’t speak to reporters at that tournament, saying those interactions create doubts for her.

Then, after her first-round victory in Paris, she skipped the mandatory news conference.

Osaka was fined $15,000 and – surprisingly – publicly reprimanded by those in charge of Grand Slam tournaments, who said she could be suspended if she kept avoiding the media.

The next day, Osaka withdrew from Roland Garros entirely to take a mental health break, revealing she has dealt with depression and anxiety.

Osaka opened up about her mental health struggles and her decision to drop out of the French Open in an essay in Time magazine, saying “it’s O.K. to not be O.K.”

She sat out Wimbledon, too. So the Tokyo Games marked her return to competition.

“I’ve taken long breaks before and I’ve managed to do well,” said Osaka, who initially didn’t comment after her loss, then came back out and met with a small group of reporters. “I’m not saying that I did bad right now, but I do know that my expectations were a lot higher.

“I feel like my attitude wasn’t that great because I don’t really know how to cope with that pressure, so that’s the best that I could have done in this situation.”

Japan reactsReaction in Japan began with “Masaka,” which means “No way.”

And people quickly turned to an outpouring of sympathy.

“Watching you gave me courage. You don’t have to win a medal. Watching you play is enough for all your fans,” said Yuji Taida, a novelist.

Japanese media relayed urgent reports on her loss, with “masaka” in the headlines.

“Her mother’s motherland. Her dream to stand at the pinnacle, with the rising sun on her heart, was not to be,” reported Sports Hochi, a Japanese daily sports newspaper.

The stock of Japanese tennis racket maker Yonex, one of her major corporate sponsors, plunged Tuesday as she lost, but recovered much of the ground later.

For many Japanese, the Japan-born Osaka, whose father is Haitian, has grown to personify a ray of hope for diversity in a nation long linked with discrimination and intolerance for differences.

Some Japanese said it broke their hearts to imagine how much Osaka had wanted to win the gold for her country.

“She has her principles about her pride for Japan, and playing for Japan, while also being proud of her diverse roots in having a Haitian father and living in the U.S.,” said lawyer Atusko Nishiyama, who was already starting to worry Osaka might get attacked for her loss.

Nishiyama said she had been impressed by Osaka’s statements on Black Lives Matter, such as last year when she wore masks bearing names of black people who had been killed.

“Compared to her courage, it is so sad some people are still at a very low level,” Nishiyama said.

While news reports speculated whether it hurt her not to play for two months and referred to how Osaka had talked about her bouts with depression and then sat out Wimbledon, Japan’s response was overwhelmingly one of doting love.