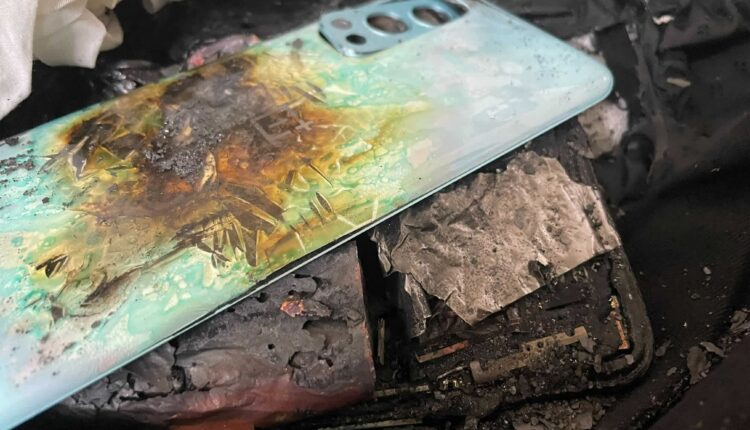 A hot potato: Gaurav Gulati, a Delhi-based lawyer, has reported and shared images of his OnePlus Nord 2 that he claims caught fire and exploded while not in use. Rather than submitting the device to OnePlus for investigation, however, he has said that he intends to resolve the issue by legal means, seeking a ban on the sale of the phone in India.

MySmartPrice was able to get some closer images of the destroyed phone, which had allegedly suddenly grown hot in the pocket of Gulati’s robe before beginning to smoke. Despite not being in use or plugged in, apparently being around 90 percent charged at the time, the phone caught fire and exploded soon after, still inside court chambers. He also claims that he suffered injuries from the fire, and was highly critical of OnePlus’s response to the incident.

OnePlus, for its part, has said that it intends to investigate the claim, although it has stopped short of offering any compensation as it couldn’t perform an investigation without having the handset to examine. The company told the site on Friday:

Last evening, an individual notified us about an alleged blast case for the OnePlus Nord 2 on Twitter […] however, despite multiple attempts to analyse the device, including a visit to the premises earlier today to examine it in the individual’s presence, he has so far denied us the opportunity to perform a proper diagnosis. Under such circumstances, it is impossible for us to verify the legitimacy of this claim or address this individual’s demands for compensation.

This isn’t the first case of a Nord 2 catching fire. Another phone had previously gone up in flames back at the start of August, less than a fortnight after its launch. According to OnePlus, that was an “isolated incident involving external factors,” but another one of the handsets exploding a month later certainly doesn’t give them a look of reliability.

It seems that Gulati agrees. As well as filing an official complaint against OnePlus India through the police, he also plans to file with the Indian consumer courts, seeking an injunction to block the phone’s sale in the country and for OnePlus to recall the phones for inspection.