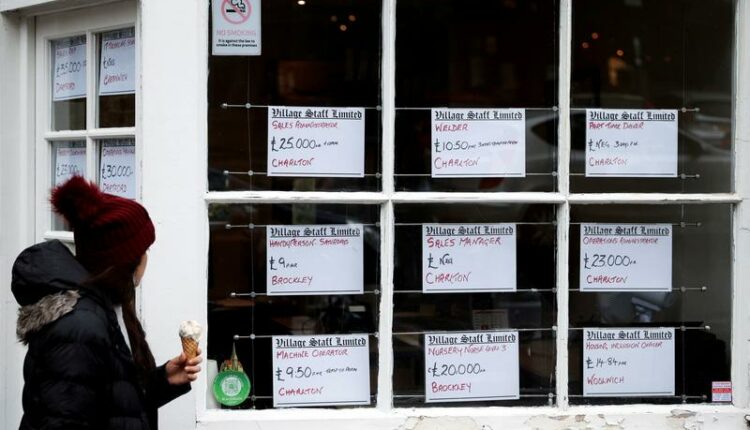 A person looks at the adverts in the window of a job agency in London, Britain October 13, 2020. REUTERS/Hannah McKay/File Photo

LONDON, Sept 16 (Reuters) – British businesses have reported a sharp rise in recruitment difficulties within the space of just a few weeks – partly as a result of a continued lack of European Union workers, official figures showed on Thursday.

Some 41% of companies with 10 or more staff reported greater than usual recruitment challenges in the two weeks to Sept. 5, up from 32% in early August, the Office for National Statistics (ONS) said.

Around a quarter of businesses with recruitment difficulties named a reduced number of EU applicants as a factor, rising to almost half in the transport and storage sector, where a lack of truck drivers has led to widespread delivery bottlenecks.

Labour shortages were most widespread in hospitality, followed by water utilities, healthcare and construction.

Britain introduced new immigration rules on Jan. 1 which require most EU workers not already living in Britain to get work visas, something that can be time-consuming and costly.

The number of EU nationals employed in Britain in the three months to the end of June was 8.7% lower than before the COVID-19 pandemic, compared with a 2.4% fall in the size of the total workforce, the ONS said.

ONS data earlier this week showed Britain had more than an average of just over 1 million job vacancies in the three months to the end of August, a record high. read more

Recruitment difficulties had also become a theme in company earnings reports in the past quarter, said Sarah Coles, a personal finance analyst at brokers Hargreaves Lansdown.

“In some cases, this means businesses are struggling to operate effectively, which in turn is putting the brakes on GDP,” she said.

Employers have called on the government to temporarily ease visa rules to allow them more time to train British staff, but the government has rejected this so far and said part of the solution is for businesses to improve pay and conditions. read more

The Bank of England expects higher oil prices and post-pandemic bottlenecks, including labour shortages, to push inflation up to 4% by the end of the year, although it thinks this will fade and sees potential slack in the job market.

Britain’s COVID furlough programme ends on Sept. 30. Businesses said that in the two weeks to Sept. 5, 6% of their staff were receiving furlough payments for some or all of their hours, equivalent to about 1.6 million employees.

Are all USB-C to USB-A cables the same? We compare two $12 Amazon Basics cables

How to Intervene When a Manager Is Gaslighting Their Employees