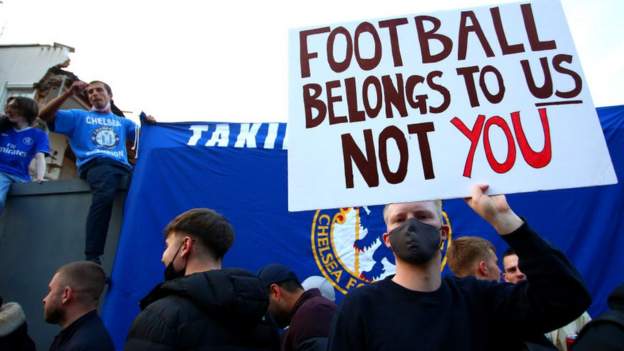 There were protests from fans of the Premier League’s “Big Six” clubs following the news that they had intended to join the European Super LeagueThe Government has named the members of the panel that will oversee the fan-led review into English football.

Labour criticised the review, saying the panel only includes one fan.

“This hasn’t got the look or feel of being fan-led,” Labour’s Jo Stevens MP said.

“Of the 10 members of this panel only one is a fan representative.

“Fans are still waiting for ministers to explain how their views and ideas will be listened to so that we can all be confident that this review really will live up to the Government’s promise that it will be led by the fans.”

The panel, chaired by Tracey Crouch MP, will canvass fans’ views on ownership, governance and financial flows within the game.

The full panel is as follows:

The panel will also assess if an independent regulator may have beneficial impact.

Culture Secretary Oliver Dowden said: “This expert panel brings together a wealth of knowledge and experience from across the football family to shape the future of our national game.

“Their job will be to listen to fans and ensure their views are at the heart of reforms on governance, finance and improving day to day experience of supporters.

“Football is nothing without fans, and today we deliver on our promise to put them in the driving seat.”