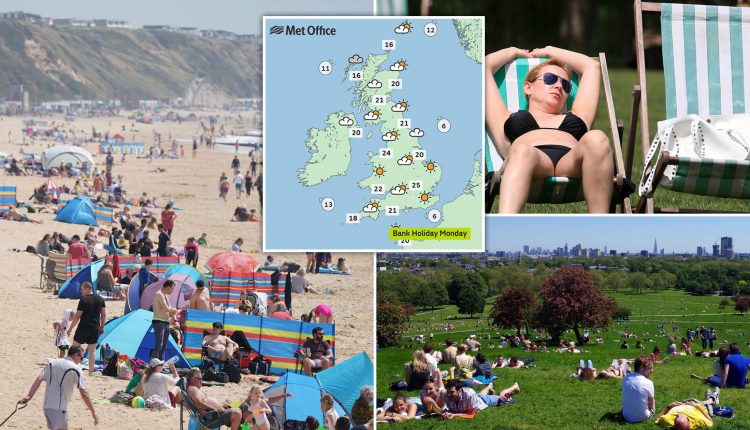 The balmy Bank Holiday weather is set to continue today as Britons flock to the beach in the sunshine.

Temperatures are rising across the country today, but it could get even warmer on Monday, possibly reaching 25C.

This would be the hottest temperature recorded in the UK so far this year, topping the current high of 24.5C measured in Kew Gardens on March 31.

The Met Office said eastern parts of England and Scotland would be overcast this morning before the cloud retreats back to coastal areas where it may linger in places.

Evening cloud was forecast to spread from these coastal areas to eastern counties and parts of the Midlands in the evening, but a dry night with clear periods was predicted elsewhere throughout the UK.

A dry Monday with warm sunshine was predicted for most areas, with early cloud over sections of England and Scotland again forecast to shift back to North Sea coastal regions as the day progresses.

The weekend started well as London and the South East recorded highs of 21C on Saturday, sending people to parks and beaches.

In Cambridge, a floating bar did a roaring trade with the punters out on the River Cam and all those lining the banks.

The fine weather stretched the length of the country, with the mercury creeping over 20C in most areas.

Sunday across the north of England and the Midlands is expected to bring a few clouds but also expected highs of 22C.

Wales will also bask in the ongoing sunshine on Sunday, with a top temperature of 21C.

It is a similar picture in Norther Ireland, while in Scotland things will be a little cooler with a maximum of around 15C in Edinburgh.

But before catching some rays, the Met Office has warned the public to make sure they don plenty of sun cream as UV levels will be high or very high

The Met Office said: ‘Keep covered and wear a hat and sunglasses, spend time in the shade and use a high factor sun cream with good UVA protection to protect yourself.’

The disability employment gap: ‘I was told to live on benefits because…

Casualty spoilers: Fenisha finally tells Ethan how she feels, but will…

COVID-19 Misinformation Is a ‘Serious Threat to Public…