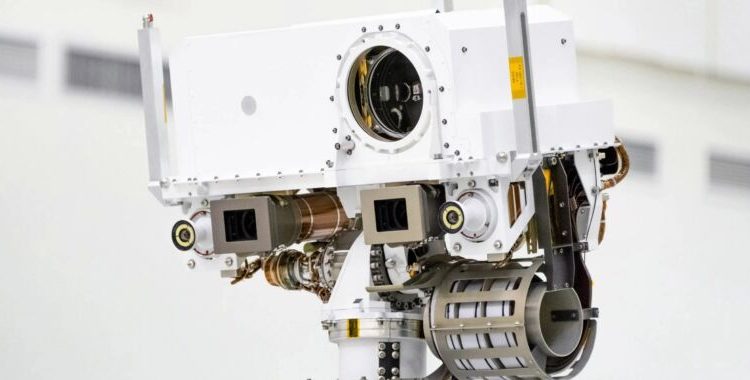 The seven minutes of terror are over. The parachute deployed; the skycrane rockets fired. Robot truck goes ping! Perseverance, a rover built by humans to do science 128 million miles away, is wheels-down on Mars. Phew.

Percy has now opened its many eyes and taken a look around.

The rover is studded with a couple dozen cameras—25, if you count the two on the drone helicopter. Most of them help the vehicle drive safely. A few peer closely and intensely at ancient Martian rocks and sands, hunting for signs that something once lived there. Some of the cameras see colors and textures almost exactly the way the people who built them do. But they also see more. And less. The rover’s cameras imagine colors beyond the ones that human eyes and brains can come up with. And yet human brains still have to make sense of the pictures the cameras send home.

To find hints of life, you have to go to a place that was once likely livable. In this case, that’s Jezero crater. Three or four billion years ago, it was a shallow lake with sediments streaming down its walls. Today, those are cliffs 150 feet tall, striated and multicolored by those sediments spreading and drying across the ancient delta.

Those colors are a geological infographic. They represent time, laid down in layers, stratum after stratum, epoch after epoch. And they represent chemistry. NASA scientists pointing cameras at them—the right kind of cameras—will be able to tell what minerals they’re looking at and maybe whether wee Martian beasties once called those sediments home. “If there are sedimentary rocks on Mars that preserve evidence of any ancient biosphere, this is where we’re going to find them,” says Jim Bell, a planetary scientist at Arizona State University and the principal investigator on one of the rover’s sets of eyes. “This is where they should be.”

That’s what they’re looking for. But that’s not what they’ll see. Because some of the most interesting colors in that real-life, 50-meter infographic are invisible. At least they would be to you and me, on Earth. Colors are what happens when light bounces off or around or through something and then hits an eye. But the light on Mars is a little different than the light on Earth. And Perseverance’s eyes can see light we humans can’t—light made of reflected X-rays or infrared or ultraviolet. The physics are the same; the perception isn’t.

Bell’s team runs Mastcam-Z, a set of superscience binoculars mounted atop Perseverance’s tower. (The Z is for zoom.) “We developed Mastcam-Z for a rover going to a spot on Mars that hadn’t been selected yet, so we had to design it with all the possibilities in mind—the optimal set of eyes to capture the geology of any spot on Mars,” says Melissa Rice, a planetary scientist at Western Washington University and co-investigator on Mastcam-Z.

Close-up, Mastcam-Z can see details about 1 millimeter across; from 100 meters out, it’ll pick up a feature just 4 centimeters wide. That’s better than you and me. It also sees color better—or, rather, “multispectrally,” capturing the broadband visible spectrum that human people are used to, but also about a dozen narrow-band not-quite-colors. (Rice co-wrote a very good geek-out about all this stuff.)

Its two cameras pull off this feat of supervision with standard, off-the-shelf image sensors made by Kodak, charge-coupled devices like the ones in your phone. The filters make them special. Ahead of the CCD is a layer of pixels that pick up red, green, and blue. Imagine a foursquare grid—the top squares are blue and green, the bottom green and red. Now spread that out into a repeating mosaic. That’s called a Bayer pattern, a silicon version of the three color-sensing photoreceptors in your eye.

Mars and Earth bathe in the same sunlight—the same hodgepodge of light at every wavelength. But on Mars there’s less of it, because the planet is farther out. And while Earth has a thick atmosphere full of water vapor to reflect and refract all that light, Mars has only a little atmosphere, and it’s full of reddish dust.