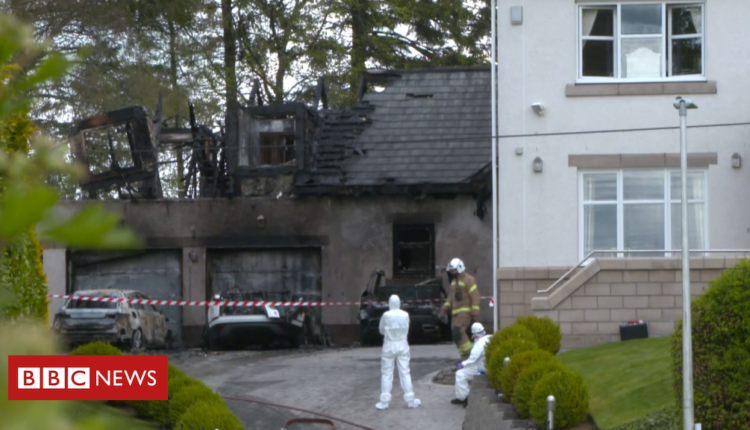 image captionFirefighters at the scene on WednesdayA masked man was captured on CCTV deliberately setting fire to three vehicles outside the home of Celtic chief executive Peter Lawwell.

The club earlier said Mr Lawwell and his family are “extremely shaken” after the blaze, which also caused extensive damage to a garage.

The alarm was raised in Thorntonhall, South Lanarkshire, at about 01:00.

Police said footage shows the suspect pouring an accelerant on vehicles outside the house on Peel Road.

No one was injured as a result of the incident, which is being treated as wilful fire-raising.

image captionMr Lawwell is Celtic chief executive and due to retire next monthThe suspect is described as 5ft 10in and of slim build. He was wearing black jogging trousers, a black hooded jumper with the hood up, black trainers and a face mask.

Officers said a silver or grey hatchback car was also seen near to the house at the time of the fire.

Det Insp Susie Cairns said: “This was a completely reckless act which destroyed three cars and caused significant damage to the property’s garage.

“The consequences could have been so much worse.”

She urged anyone who was in the area at the time or who has relevant dashcam footage to get in touch with officers.

The Scottish Fire and Rescue Service confirmed eight appliances responded to the blaze.

image captionThe road leading to Mr Lawwell’s home was cordoned off after the fireMr Lawwell confirmed in January he is to retire at the end of June after 17 years at Celtic.

He has been replaced by Dominic McKay, who has already moved from Scottish Rugby to take up the post.

A Celtic spokeswoman said: “We can confirm that significant damage has been caused to Peter Lawwell’s house and vehicles there, following an explosion and fire early this morning, forcing the family to leave the property.”

“Clearly, Peter’s family are extremely shaken and shocked by these terrible events, but thankfully all are safe.”