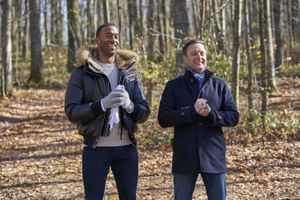 Everything isn’t coming up roses for Chris Harrison. The longtime host of ABC’s popular Bachelor franchise on Saturday announced he’ll step aside from hosting The Bachelor “for a period of time” as backlash continues over his comments about photos showing a current contestant attending an antebellum-plantation-themed party.

The controversial pictures evoke a painful period in American history before the Civil War ended slavery and have sparked serious, soul-searching discussion among Bachelor fans and former contestants about race, representation and accountability. A Change.org petition calling for the removal of Harrison as host of The Bachelor, The Bachelorette and spinoff shows has gotten more than 39,500 signatures as of Sunday afternoon. And Rachel Lindsay, the first Black Bachelorette star, says she’s done with the franchise.

“I have spent the last few days listening to the pain my words have caused, and I am deeply remorseful,” Harrison said in a public apology Saturday, the second in a week. “My ignorance did damage to my friends, colleagues and strangers alike … Now, just as I have taught my children to stand up, and to own their actions, I will do the same.”

Here’s the whole brouhaha, broken down.

What did Chris Harrison say (or not say)?

During an Extra interview Tuesday with former Bachelorette star and current TV host Rachel Lindsay, Lindsay broached photos that had surfaced of Rachael Kirkconnell, a contestant on season 25 of The Bachelor, airing now. The images show Kirkconnell with fellow sorority members at an antebellum-plantation-themed party during college in 2018.

“We all need to have a little grace, a little understanding, a little compassion,” the 49-year-old Harrison said during the interview with Lindsay. “Because I have seen some stuff online — this judge, jury, executioner thing where people are just tearing this girl’s life apart and diving into, like, her parents, her parents’ voting record. It’s unbelievably alarming to watch this. I haven’t heard Rachael speak on this yet. Until I actually hear this woman have a chance to speak, who am I to say any of this? I saw a picture of her at a sorority party five years ago and that’s it.”

Harrison, host of The Bachelor since 2002, said that while he’s not defending the gathering, people would not have examined an Old South party “under the same lens” in 2018 as they would in 2021, given the heightened consciousness of racial inequality amid the Black Lives Matter movement. Lindsay, an outspoken advocate for diversity in the franchise, disagreed. You can watch the interview below.

“It’s not a good look ever,” Lindsay said, emphasizing the photos’ implicit connection to slavery and degradation. “She’s celebrating the Old South. If I went to that party, what would I represent?” Lindsay, who hosts a Bachelor Nation podcast and sometimes makes cameos on the show, has since said she won’t renew her contract with the franchise when it runs out.

“I’m exhausted. I have truly had enough,” Lindsay said on Friday’s episode of her Spotify Original Podcast Higher Learning.

How did the public react to Rachel Lindsay’s interview?

Harrison has loyal supporters who are standing behind him and decrying the “woke police” and “cancel culture.” One Twitter follower wrote: “So sorry you had to apologize. I can’t believe everyone has become so sensitive.” One Instagram response read: “I can’t wait until you’re back and continuing with something millions of us love to see you do!”

Still, criticism has continued to mount, including on Twitter and The Bachelor subreddit, where discussion of the controversy has overshadowed all other Bachelor buzz for days.

A number of high-profile contestants, including Mike Johnson, Taylor Nolan and former Bachelorette stars Tayshia Adams, Kaitlyn Bristowe and Jillian Harris, have expressed deep disappointment in Harrison and his choice of words and have called on series producers to vet contestants more carefully. Matt James, the star of this season’s show, on Friday expressed his gratitude to Lindsay for continuing to shine a spotlight on representation and responsibility in the franchise, which fans have criticized for its lack of diversity.

“I am beyond grateful to have Rachel as a mentor during this season,” James wrote on Instagram. “Your advocacy of BIPOC people in the franchise is invaluable, I stand with you and the rest of the women advocating for change and accountability.”

The day before, almost every contestant of The Bachelor Season 25, including Kirkconnell, posted the same message on social media denouncing any “defense of racism.”

“Any defense of racist behavior denies the lived and continued experiences of BIPOC individuals,” the statement reads. “These experiences are not to be exploited or tokenized.”

“Rachel Lindsay continues to advocate with ‘grace’ for individuals who identify as BIPOC within this franchise,” the statement concludes. “Just because she is speaking the loudest, doesn’t mean she is alone. We stand with her, we hear her, and we advocate for change alongside her.”

The men of season 16 of The Bachelorette — which preceded Matt James’ season of The Bachelor and featured two back-to-back leads, including Adams, who is Black — also released a statement “denouncing racist behavior and any defense thereof.”

“We had the opportunity to be a part of one of the most diverse casts in the history of the franchise,” the statement reads. “The addition of more people who identify as BIPOC has opened up the conversation on race, community and who we are as people. A conversation that has been long overdue.”

What about Chris Harrison’s first apology?

On Wednesday, prior to Saturday’s announcement that he’d be taking time off from hosting duties, Harrison issued the following statement:

“To my Bachelor Nation family — I will always own a mistake when I make one, so I am here to extend a sincere apology,” it read. “I have this incredible platform to speak about love, and yesterday I took a stance on topics about which I should have been better informed.”

“While I do not speak for Rachael Kirkconnell, my intentions were simply to ask for grace in offering her an opportunity to speak on her own behalf,” he continued. “What I now realize I have done is cause harm by wrongly speaking in a manner that perpetuates racism, and for that I am so deeply sorry. I also apologize to my friend Rachel Lindsay for not listening to her better on a topic she has a firsthand understanding of, and humbly thank the members of Bachelor Nation who have reached out to me to hold me accountable. I promise to do better.”

Bachelor Nation, for those who don’t follow the reality TV franchise, refers to fans and former participants of the long-running romance show. You don’t need a visa to visit Bachelor Nation, just a TV or computer. Bachelor Nation is known for its dedicated fans with a vocal presence on social media, where weekly episodes spark an amusing run of memes and jokes that can get thousands of likes and comments. Reactions to the show’s drama and fast-tracked relationships are often funny and snarky, and that tone has seeped into the public treatment of Harrison this week. Most of the discussion has a somber tone, however.

“To the Black community, to the BIPOC community: I am so sorry,” it reads. “My words were harmful. I am listening, and I truly apologize for my ignorance and any pain it caused you. I want to give my heartfelt thanks to the people from these communities who I’ve had enlightening conversations with over the past few days, and I am so grateful to those who have reached out to help me on my path to anti-racism.”

ABC did not immediately respond to a request for comment Saturday.

Kirkconnell, for her part, issued her own apology following Harrison’s interview, saying that “I was ignorant, but my ignorance was racist. I am sorry to the communities and individuals that my actions harmed and offended. I am ashamed about my lack of education, but it is no one’s responsibility to educate me.”

“I deserve to be held accountable for my actions,” she concluded. “I will never grow unless I recognize what I have done is wrong. I don’t think one apology means that I deserve your forgiveness, but rather I hope I can earn your forgiveness through my future actions.”

Where to buy PS5: Inventory updates for Amazon, Best Buy, Walmart and other retailers