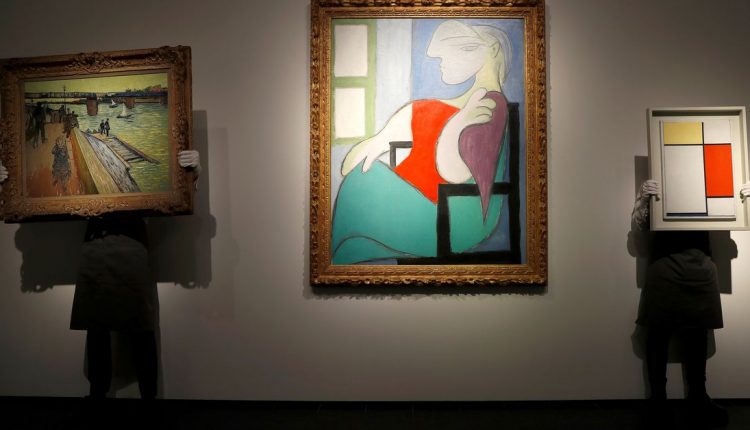 Employees pose for a photograph with “Le pont de Trinquetaille” by Vincent van Gogh, “Femme Assise Pres d’Une Fenetre (Marie-Therese)” by Pablo Picasso and “Composition: No. II with Yellow, Red and Blue” by Piet Mondrian, at Christie’s gallery prior to the New York spring season of evening sales, in London, Britain, April 22, 2021. REUTERS/Peter Nicholls NO RESALES. NO ARCHIVES./File Photo

An oil painting by Pablo Picasso sold for $103.4 million at a Christie’s auction in New York, smashing its presale estimate of $55 million.

Keith Gill, head of the Impressionist and Modern Art department at Christie’s London, said the work may be familiar to art lovers from its appearance at a landmark Picasso 1932 exhibition at the Tate Modern in 2018.

“It’s an incredibly iconic image. It hasn’t been seen up at auction since 2013. And the appreciation of Marie-Therese portraits, particularly from 1932, has very much grown since that time. So this will be a stand-out price for the artist,” said Gill.

After an intense bidding war, the Picasso was snapped up by an online bidder in California, Christie’s said.

Thursday’s auction, which was streamed live from the Rockefeller Center, marked the fifth work by the Spanish painter to have sold for more than $100 million.