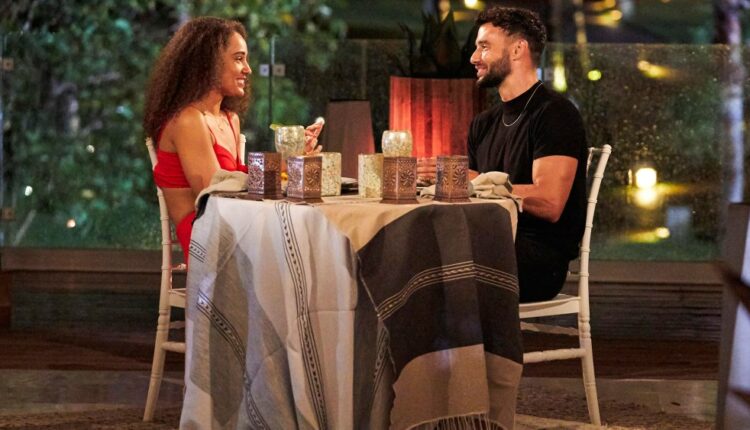 Liar liar! Brendan Morais and Pieper James finally addressed the seriousness of their pre-show relationship during the Monday, September 6, episode of Bachelor in Paradise.

Natasha Parker thought she and Brendan were in a solid place. However, things changed when Pieper arrived and immediately asked him on a date without considering anyone else. Brendan told Natasha it was a coincidence that Pieper showed up — despite rumors that they were an item before the show — and that he wanted to explore his connection with Pieper.

During Brendan and Pieper’s date, she accused him of “downplaying” their pre-show relationship. She confirmed they were together before coming to Paradise, but he hinted that they had to sell a certain story and he had to get roses from other women if he and Pieper wanted to achieve their goals.

“We have to have each other’s back,” Brendan told Pieper. “It has to be you and me, first and foremost, before anyone else on the beach, and that’s the only way we’re gonna get through this, like, being in the position we wanna be in, utilizing this time here and taking advantage of what Paradise would promote together.”

After their talk, Pieper declared that Brendan was her boyfriend and they were continuing their relationship. The next day, Natasha confronted Pieper and found out that Brendan lied about the seriousness of his romance with Pieper. Pieper admitted that she and Brendan saw each other right before he left for Paradise and they were a couple without labels before he arrived. Natasha felt “played,” while Brendan claimed that Natasha had “zero prospects” without him.

When Natasha spoke to Brendan about the inconsistencies, he alleged that the two of them were only friends and he told her as much when he gave her a rose, which she denied. He also claimed that he did not prevent her from forming connections with other men on the beach.

Pieper and Brendan later discussed the number of Instagram followers they gained after Us Weekly broke the news that they were dating before filming. They admitted that they chose not to put a label on their relationship so that they could come to Paradise, while Natasha said they should leave the beach.

Elsewhere in the episode, exes Kendall Long and Joe Amabile had a long overdue conversation about their split after she arrived on the beach. She confessed that she didn’t feel right moving on because their relationship didn’t feel completely over to her. They then rehashed their breakup, with Joe revealing that he returned to L.A. four months after they ended things to push her to move to Chicago with him, but she refused. He knew Kendall was still in love with him, but he liked where his romance with Serena Pitt was going.

Serena, meanwhile, was worried that Joe and Kendall’s history would sabotage her connection with him. He told Serena that he and Kendall needed to talk more to figure out why she was there: to rekindle things with him — even though he insisted he was over Kendall — or date other people. He assured Serena that he didn’t want to ruin her chances to find love and promised to be honest with her as he figured out his feelings.

After Kenny Braasch returned from his date with Tia Booth, Mari Pepin told him that she still had feelings for him and regretted saying she wanted to be open to other people. He believed he had something special with Mari but wanted to be respectful of his connections with Tia and Demi Burnett before jumping back into a relationship with Mari. He also wondered whether he could trust her.

Demi was not thrilled when she discovered that Kenny wanted to explore his connections with her, Mari and Tia. He made matters worse with Demi when he turned down her offer to go to the boom-boom room.

Noah Erb, for his part, wanted to give his romance with Abigail Heringer another try. They agreed to not throw away what they had, instead deciding to work on communicating better.

Scroll through the gallery below to see where the couples stand after the sixth episode:

How to Style This Flowy Maxi Dress From Summer to Fall