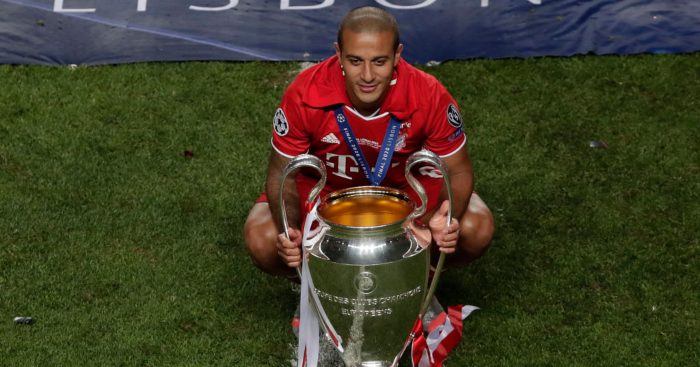 Pundit: Bayern have ‘got to keep’ Thiago amid Liverpool links

Former Bayern Munich midfielder Owen Hargreaves thinks the German side “got to keep” Thiago Alcantara amid links to Premier League side Liverpool.

Thiago has been heavily linked with a move to Liverpool throughout the summer, with some reports suggesting he had even agreed a four-year contract ahead of a move to Anfield

However, the Premier League champions have reservations over spending £23m or so on a 29-year-old with less than 12 months left on his Bayern Munich deal, particularly in the current economic climate.

OPINION: Bayern beat PSG in a Champions League final for the ages

Manchester City and even Arsenal are said to have joined the fray for Thiago but Hargreaves has urged his former club to hold onto him.

“They have got to keep Thiago, he is so important and he was fantastic. Liverpool fans would have been watching that saying yes please,” the ex-Bayern star told BT Sport following Bayern’s Champions League final victory on Sunday.

The Bundesliga outfit completed a perfect run through this longest of Champions League campaigns as they beat Paris Saint-Germain 1-0 to lift the European Cup for a sixth time.

Paris-born Kingsley Coman scored the only goal just before the hour as Bayern made it 11 wins out of 11 in the competition this season, lifting the trophy in an empty Estadio da Luz in Lisbon some 85 days after the final had originally been scheduled in Istanbul.

Hargreaves added: “They have win 21 wins in a row, it wasn’t the game we expected but Flick has found the big decisions at the right moments.

“[Manuel] Neuer and Thiago were outstanding. Bayern have more depth. If [Kylian] Mbappe and Neymar don’t step up, who does? No one. But that is not the case at Bayern.

“He [Flick] has gone in and turned this team into a machine, everybody is blown away. The football has blown everyone away. He has brought everyone together.”