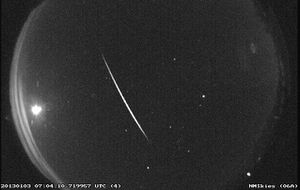 The new year has finally arrived, and 2021 kicks off with a nice light show for those willing to head outside in the early morning hours Sunday to see the Quadrantid meteor shower. The Quadrantids aren’t nearly as well known as the Perseids or Leonids, but they have the potential to be one of the strongest meteor showers of the year.

The challenge is that these shooting stars and bright fireballs risk getting washed out by the bright moon that won’t be far off its full phase Saturday night and Sunday morning. Also, the peak of the Quadrantids is quite narrow, with a window of just a few hours rather than a few days like other showers.

From the lab to your inbox. Get the latest science stories from CNET every week.

But with a little planning, you might be able to catch the display, which has been known to produce over 100 meteors per hour, including a fair amount of bright fireballs.

The International Meteor Organization predicts that the Quadrantids will officially peak in the hour before sunrise on the Pacific coast of much of North America, or a few hours after the sun is up on the East Coast. However, such predictions aren’t always accurate, so your best bet is simply to venture out sometime in the hours between about 2 a.m. and sunrise on Sunday.

You’ll want to avoid light pollution as much as possible and find a place to watch with good weather, a broad view of the sky and the ability to orient your gaze away from the bright moon as much as you can. Keep in mind that the show is generally better in the northern hemisphere, where you’re probably going to want to bundle up to brave winter temperatures in most locations.

The Quadrantids will seem to emanate from the region of the sky near Polaris, the North Star, but will zip across all parts of the sky.

This is because what’s really going on is that Earth is drifting through a cloud of debris tied to the asteroid 2003EH1, which might have once been a comet. While the origins of these meteors might be somewhat mysterious, they will nonetheless be colliding with our atmosphere and burning up in spectacular fashion.

77.9% of Users Sustained Weight Loss Over 9 Months Using This Program