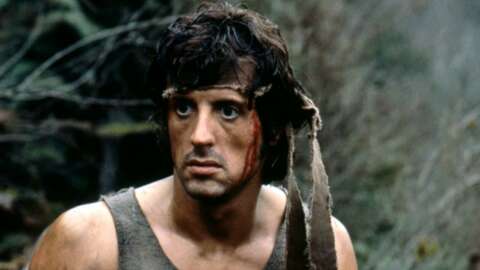 John Rambo one of the best-known characters to come out of the 1980s, and helped make Sylvester Stallone into the mega-star he is today. Quentin Tarantino sees a new future for Rambo, however, in Adam Driver, the director said on The Big Picture Podcast.

Tarantino is known for his auteur films like Once Upon a Time in Hollywood, Kill Bill Vol. 1 and 2, and Pulp Fiction, but he seems to be considering, if only in fun, an adaptation as his next project.

“If I just wanted to make a good movie, that I knew would be good, I would take David Morrell’s novel for First Blood and do the novel. Not the movie that was made out of First Blood. I would do the novel. And Kurt Russell would play the sheriff, and [Adam Driver] would play Rambo. Every time I read it, the dialogue is so fantastic in the David Morrell novel that you’re reading it out loud. It would be so good. But now I want to do more than that. But if it was just about to make a good movie, that’s out there.”

These days, Rambo is somewhat of a joke in American pop culture, remembered a relic of Reagan-era jingoism and, more recently, an actor playing a character he’s a bit too old for. But Rambo first came to life in the pages of David Morrell’s novel, First Blood.

While the film is good in its own right and maintains the focus on the ways war can destroy a soldier’s life even after they return home–it’s a pretty early example of a soldier dealing with Post-Traumatic Stress Disorder on screen–the book is quite different. Set in Kentucky rather than the Pacific Northwest, the local police are far less sadistic than in the film, with a standard prison haircut triggering Rambo’s flashbacks and reaction, rather than the brutal torture he endures in the film. Rambo and his adversary, Will Teasle (Chief of Police instead of Sherriff), are also shown to be equally determined and dangerous. After Rambo kills many of the local police officers–he only wounds them in the film–Teasle gets the upper hand and shoots Rambo in the stomach. The story ends with Rambo’s mentor, Trautman, killing him. In the film, Rambo walks away in a blanket. He’s not framed as a hero in either case, but instead as a troubled man left behind by his country after the war.

The movies that came after First Blood moved further and further away from the original character and into unintentional parody in the next two films. Tarantino wants to make something much closer to the book. Adam Driver likely comes to Tarantino’s mind both for his well-regarded performances in movies like BlacKkKlansman and Marriage Story and for his time in the United States Marine Corps (though he never saw combat).

Is this movie likely? It seems like Tarantino is just musing about what he’d do if he had all the time in the world–his version of picking up carpentry or some other time-consuming hobby. With that said, Adam Driver could make a killer Rambo in both senses, and we’d definitely watch.

Deadpool 3: Ryan Reynolds Gives An Update On How The Movie Is Shaping Up