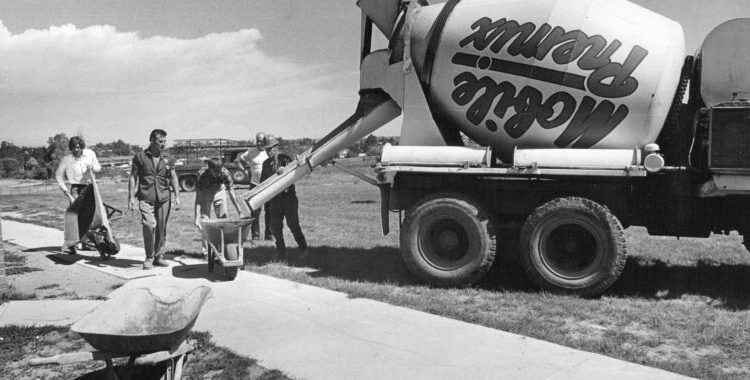 For Bryan Kalbfleisch, cement is a way of life. “I was born and raised in the ready-mix concrete business,” says the New Jersey-based chief executive, explaining his father worked in the sector for 40 years. “I was the kind of kid who could operate heavy machinery, before I could drive.”

Now he is doing something that he never imagined—developing a new type of concrete that can store carbon dioxide to help combat climate change.

The Solidia Technologies startup that he runs is part of a growing number trying to solve one of the toughest problems in heavy industry: how to make concrete without producing a lot of greenhouse gas emissions.

Concrete is one of the most used commodities in the world, second only to water, and among the most polluting. The industry accounts for about 2.6 billion tonnes of carbon dioxide each year, or about 6 percent of global emissions. If it were a country, it would be the fourth-biggest emitter, just behind India, ahead of Russia and Japan.

Startups trying to produce low-carbon cement are attracting some of the most prominent tech investors, such Bill Gates’ Breakthrough Energy, Amazon’s Climate Pledge Fund, as well as venture capitalist John Doerr of Kleiner Perkins. More than $100 million in venture funding has gone to cement startups in the past 12 months.

Large cement makers, including Holcim of Switzerland and HeidelbergCement in Germany, are also working on the problem.

“This area is really interesting to us because it is a big problem that needs to be solved,” says Jonah Goldman, managing director of Breakthrough Energy, which has recently invested in three cement startups: Solidia, CarbonCure and Ecocem.

“There are different ways to approach it, because it seems like such an unapproachable problem. It is inherently a greenhouse gas-emitting product,” he explains. “Just the natural process of creating it is releasing carbon into the atmosphere.”

Ian Riley, chief executive of the World Cement Association, says the industry has already cut emissions by more than a fifth during the past two decades, by traditional means, such as using more efficient kilns, cleaner energy sources for heating, and making cement with less clinker.

The industry can reduce emissions by another 30 percent using those methods, he estimates, but not all the way to zero. “A lot of the low-hanging fruit has already been picked,” says Riley. “That still leaves 70 percent of emissions that we haven’t addressed—and for that 70 percent we really need some new approaches.”

Whoever finds the winning solution will stand to benefit greatly from an industry worth $300 billion a year.

CarbonCure, a startup based in Canada, has developed an add-on machine that injects CO2 at the point of mixing the cement with water and sand to create concrete. This permanently stores the CO2 and makes the concrete stronger.

Rob Niven, founder and chief executive, says its goal is to store 500 million tonnes of carbon dioxide a year. Its equipment is used at more than 400 concrete mixing sites, and it has backing from investors including Mitsubishi, Microsoft, and Amazon.

CarbonCure gets revenue from licensing fees from the construction companies that use its technologies, as well as from selling carbon credits for the captured CO2.

“Our job is to create value from CO2 molecules and permanently store them away, so that they never go into the atmosphere and contribute to climate change,” says Niven.

At Solidia, Kalbfleisch is taking a different approach: one that produces concrete paving blocks, like those used in landscaping, by curing the material in a chamber of carbon dioxide.

“Solidia cement reacts with CO2, it uses very little water in the precast process, compared to traditional concrete,” explains Kalbfleisch. “About 3 to 5 percent of the finished product weight is solid carbon,” he adds.

Another startup, CarbonBuilt, with ties to the University of California, Los Angeles, is developing concrete blocks that use less carbon-intensive raw materials and are hardened with CO2 from flue gas.

Rahul Shendure, chief executive, says that the process requires an upfront capital investment of about $1 million for each block production line, with the idea being that companies save money over time by using the cheaper raw materials. “Once you put the capex in, it is cheaper to make than traditional concrete,” he says.

One challenge for all the “green” cement startups is that at present, large cement companies have few financial incentives to reduce their emissions.

Europe is an exception, where cement companies have to buy allowances to cover their CO2 emissions and can save money if they produce less. But in many other countries, such as the US, policies are not in place yet to encourage cement makers to pay for greener alternatives.

“It isn’t so much that there are regulations today [that require emissions cuts],” says Riley. “It’s just at some point, the social license to operate, will depend on [producers] doing something like this.”

Many of the world’s largest cement makers are also racing to crack the formula in anticipation of tighter rules that could be imposed on them.

Magali Anderson, its chief sustainability officer, says Holcim is working with different materials, such as calcined clay, to make cement with lower emissions, in addition to other approaches. Holcim is also partnering with Solidia to produce concrete in the US. Climate Capital Where climate change meets business, markets and politics.

While these changes will help reach its near-term emissions goals, Anderson says using carbon capture solutions will be necessary in the long run. Holcim has more than 20 pilot projects under way to test different ways of capturing carbon from the cement process.

Even as these technologies improve, it will still be costly to produce zero-carbon cement. Along with sectors such as aviation and shipping, cement is simply likely to remain one of the hardest industries to decarbonize, explains Lord Adair Turner, chair of the Energy Transitions Commission.

“With cement, our calculation was that [reaching net zero] could double the cost for cement, leading to a 30 percent increase in the cost of concrete,” he says. “And that could increase the cost of construction by 3 percent. So it is small, but it is not trivial.

“So it does raise questions about who is going to pay for that, who is going to be willing to pay more for a building made from zero-carbon cement. It is more of a challenge than it is for automobiles and steel.”

© 2021 The Financial Times Ltd. All rights reserved. Not to be redistributed, copied, or modified in any way.