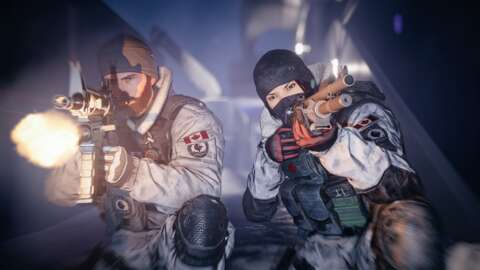 Rainbow Six Siege designer’s notes have dropped for its upcoming season, Y6S2, and it seems that it will bring a slate of overarching changes that have the potential to change the face of the entire game. These proposed shifts include giving players the ability to use limited offensive tools after death, nerfing the usefulness of bullet holes, and replacing armor with fixed HP. Many of these changes are already live on Siege’s test server.

The biggest philosophical change that could come to the game is the ability for dead players to affect the game after their untimely demise. Referred to by Ubisoft as “gameplay after death,” and currently live on the game’s test server, this allows attackers to continue to use their drones and gadgets after they die to give their living allies valuable intel. Currently, dead players can only cycle through camera angles to give intel to their living teammates.

To help mitigate the potentially-devastating impact of this change, Ubisoft has given defenders a few more options to counter drones, including a reworked bulletproof camera and a counter that keeps track of the number of drones that they have captured or destroyed. Additionally, the game’s designers have reworked the flow of post-death replays in order to make it easier for attackers to take advantage of their new abilities.

In addition to life after death, this season will bring some changes that sound minor, but will have a large impact in actual play. For example, operator armor has been replaced with static HP values to simplify the game’s math for the sake of combat readability. This season will also nerf the visual power of bullet holes, requiring players to shoot a soft surface several times to see through it. Additionally, melee hits will now shatter the glass of Mira’s Black Mirror, Maestro’s Evil Eye, and the Bulletproof Camera, which will counter these powerful abilities.

In other Siege news, we recently met Y6S2’s new operator, North Star, who can use her healing station to treat her allies’ wounds, though enemies can use it too. A recent Siege patch buffed Tachanka and removed the Tactical Realism playlist type.

Happy Fourth Anniversary To The Start Of The Cursed Dark Universe