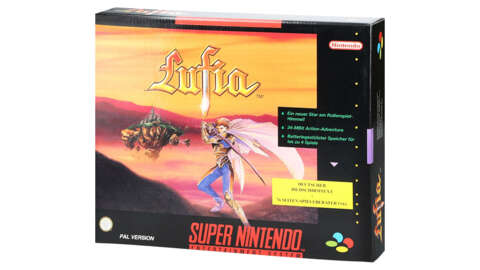 Vintage video games aren’t hard to come by these days, but finding a game in mint and sealed condition? Now that’s a rarity. As spotted by Nintendo Life, German retailer Galeria Kaufhof happens to have stumbled on a box of forgotten SNES games and has even put a few of them up for sale.

If you’ve been looking to add Lufia II: Rise of the Sinistrals–which was known simply as Lufia in Europe–to your collection, you can grab the game for a modest $95 USD for a copy that still has that factory-fresh smell sealed inside of it.

Now Playing: 20 Minutes Of The SNES Classic In Action

The catch here is that you can only reserve a copy on Galeria Kaufhof’s website, as you’ll need to go pick it up yourself in person. This version also includes a strategy guide to go along with its manual, adding to its value.

Retro gaming is currently in the crosshairs of the speculators market, and over the last few months, the price of some titles has dramatically increased, similar to the comic book boom that recently saw Spider-Man’s first comic book appearance sell for $3.6 million.

Heritage Auctions has been in the spotlight regarding these deals, as well as increased scrutiny following the release of a 52-minute video investigation by journalist Karl Jobst. The report alleges that Wata Games president and CEO Deniz Kahn worked with Heritage Auctions co-founder Jim Halperin to create a bubble economy for old video games.

In response, Wata Games released the following statement: “Wata Games is the trusted leader in collectible video game grading and we’re honored to play a key role in this booming industry that we are incredibly passionate about. We’re humbled by the support of our thousands of customers who trust us to provide accurate and transparent grading. The claims in this video are completely baseless and defamatory and it is unfortunate that Mr. Jobst did not contact us to give us the opportunity to correct him.”

Mods Prove Respawn Is 100% Right, Titanfall’s Wallrunning Shouldn’t Be In…

Why Rainbow Six Siege Moved Away From Its Counter-Terrorism Narrative

Who’s Who In Shang-Chi? Every New Character In The…